It was Tom Thibodeau’s first season as head coach of the Timberwolves, and his squad had stopped in Louisville for a couple days before a preseason game. Rick Pitino, who was coaching the Louisville Cardinals at the time, took his staff to observe Thibodeau’s session. They expected a relaxed atmosphere considering the NBA’s reputation, but were floored by the intensity and efficiency.

“He was meticulously organized, almost scary organized, and he reminded me of Bill Belichick,” Pitino told the Daily News. “I’ve spent a lot of time with Belichick and Thibodeau’s got a lot of the same mannerisms, the same attention to detail that Belichick has. And that’s about the highest compliment I could give someone.”

Pitino recalled that Andrew Wiggins, the Timberwolves’ gifted young wing, was approaching the practice lackadaisically, which prompted a succinct and effective response from Thibodeau.

Wiggins went on to his best season as a professional, averaging 23.6 points and playing all 82 games. Thibodeau, however, lasted less than three seasons with the Timberwolves, leaving behind a complicated legacy marked by success (the franchise’s only playoff berth in the last 16 years) and rifts with both the star player (Karl-Anthony Towns) and team owner (Glen Taylor).

Thibodeau, 62, is now the leading candidate to coach the Knicks coach next season and beyond, as team president Leon Rose, a longtime agent, is set to officially make his hire by the end of the month. For the struggling franchise, the most pressing matter is player development because the roster offers little in the way of established talent, only raw potential in RJ Barrett and Mitchell Robinson.

And while Thibodeau’s meticulous style might not have resonated with Towns, an examination of the coach’s history suggests that he’s boosted the careers of players who are wired to work and win. Development has always been a Thibodeau concentration.

And to understand its origins, you have to go back to Pitino.

Thibodeau was an assistant coach at Harvard in the late ’80s, and the Ivy League training camps didn’t start until a week after the other DI programs opened. So Thibodeau traveled to Providence College — roughly an hour from Cambridge — to soak in Pitino’s sessions. He picked up an innovative approach to player development, a focus on individuals and specialization that has become the NBA norm.

“Rick was the first to make guys come in during the day for an hour in groups of two and three. He termed it ‘individual instruction.’ Now they call it player development,” Jeff Van Gundy, who was a graduate assistant at Providence from 1986 to ’88, told The News. “That sort of thing was very unique — the emphasis back in the late ’80s on bringing guys back in to work on their own individual game outside of the normal team practice.

“So Providence players at that time had long, long days.”

Van Gundy, the future Knicks coach, acknowledged that Pitino’s approach wouldn’t fly today with the NCAA’s limit of 20 hours per week of practice.

The Friars advanced to the 1987 Final Four under Pitino, a Cinderella run that fueled multiple coaching careers and spawned a Pitino tree. Stu Jackson, the future Knicks coach, was a Providence assistant. Billy Donovan, the current Thunder coach, was the star point guard. Van Gundy became the coach of the Knicks and Rockets.

Thibodeau soon got his big NBA break with the Timberwolves as an assistant, and later, as a Sixers assistant, helped develop a teenaged Kobe Bryant. The pair met inside the St. Joseph’s gym when Bryant was attending Lower Merion High School in Philadelphia. Thibodeau recognized the talent, the drive and drilled the future Hall of Famer in his spare time.

“He was crucial [to my development]. He was with me when I was 16 or 17 years old,” Bryant said in 2010. “Just doing drills and just working on ballhandling and just teaching me the game. He was there from Day 1.”

Thibodeau’s next move was linking up with Van Gundy, who hired his former Providence acquaintance as an assistant with the Knicks and Rockets. In New York, Thibodeau built strong bonds with Larry Johnson and Latrell Sprewell. Their partnership peaked with a run to the 1999 NBA Finals. In Houston, Thibodeau assisted Yao Ming’s elevation to All-Star.

“Yao was the greatest worker I believe that ever existed in the NBA. I don’t think anybody could ever have done more to put themselves in a position to be as good as they could be,” Van Gundy said. “But Tom was tremendous in developing a routine that Yao could follow — a blueprint to take him from being good to being great.”

Thibodeau’s final stop as an assistant was in Boston with a star-studded roster navigating a championship window. With Doc Rivers as the head coach, Thibodeau solidified his reputation as a defensive specialist by concocting an unorthodox and highly effective scheme of overhelping the strong side. 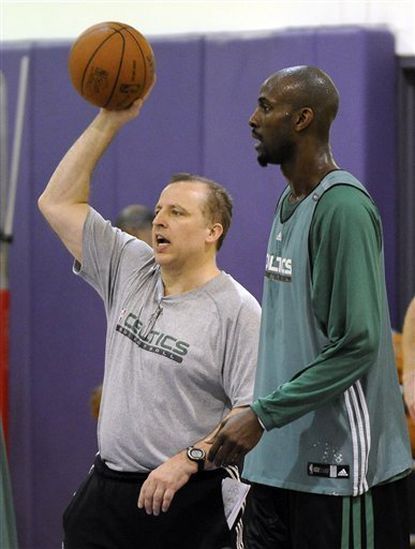 “Thibodeau would always act like he’s listening and be like, ‘You guys are more than welcome to come in my office and watch the eight hours of films that I watched. And I promise you this will work if you do it hard and you do it right,’” Scalabrine told the News.

Rivers interjected to back up Thibodeau. Then the 2007-08 Celtics became one of the best defensive teams in NBA history.

“Fifteen games in, there was no more questioning of Tom Thibodeau,” Scalabrine said.

Thibodeau’s start as head coach with the Bulls in 2010 was a remarkable success, with the Bulls winning an NBA-best 62 games and Derrick Rose becoming the NBA’s youngest MVP. Over the next five seasons, Joakim Noah, Jimmy Butler and Luol Deng became All-Stars in Chicago. Thibodeau tweaked his defense by icing on pick-and-rolls instead of showing. The Bulls never missed the playoffs despite Rose’s avalanche of injuries, and Thibodeau never abandoned his meticulous style.

Scalabrine, who played under Thibodeau in Boston and Chicago, also compared him to the Patriots coach. 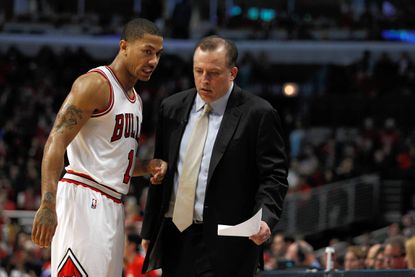 “Very similar to Bill Belichick if you ever to go to a Bill Belichick practice,” he said. “Every smallest detail of his practice is talked about. Every pass has to be seamed. Every shot has to be quick and balanced. Every pick-and-roll you have to come off shoulder-to-hip.”

At one Bulls practice, Scalabrine lost focus and learned that his history with Thibodeau wouldn’t spare him from wrath.

“Thibs laid into me something fierce,” said Scalabrine

Thibodeau threatened to release Scalabrine so he could pursue a career in broadcasting. It was a targeted burn toward a player who frequently made the media rounds. Noah piled on by making faces in the background.

“Thibs says, ‘I will cut you in a second and you can do all the radio hits you want,’” Scalabrine recalled.

The tension was short lived. Scalabrine sat next to his coach at lunch and talked through the incident. It became another lesson in Thibodeau holding his players accountable.

The specific criticisms of Thibodeau as a coach and personality have circulated the media and were pushed by his detractors. The most prominent, dating back to his years with the Bulls, is that he overworks his players and burdens their bodies with too much time on the court.

Minutes restrictions is a relatively new phenomenon and treasured by the analytics camp. The Bulls were hit with injuries, but it’s worth noting that the Chicago players who Thibodeau was accused of sabotaging — Noah, Rose, Deng, Butler and Taj Gibson — either played for him again in Minnesota or tried to get there. They all secured lucrative contracts, with Noah and Deng getting paid well above their return value after leaving Chicago. It never became an instance like in Boston with Isaiah Thomas, who squandered a potential megadeal by playing hurt in the postseason.

Deng revealed recently that Thibodeau forcefully took his side in a contract dispute with Bulls management.

“Thibs was upset, and Thibs kept telling them [the front office], ‘Sign Lu, I need you to sign Lu,’” Deng said in an Instagram Live interview. “So when the [2013-14 season] started, I wasn’t signed for the Bulls, and Thibs decided he was going to make them know how important I am for the team, and ran everything through me — and this is why I love Thibs still today.”

The heavy minutes certainly didn’t turn off players from Thibodeau. Another knock commonly directed at Thibodeau has been his lack compatibility with management or ownership, which resulted in uncomfortable moments at both his head coaching spots. It’s a reputation of not working well with others. In Chicago, the partnership with GM Gar Forman and team president John Paxson was frayed. In Minnesota, a similar dynamic with Taylor contributed to Thibodeau’s dismissal. There were rumors of Taylor ordering Thibodeau to stop cursing on the sideline, and of Thibodeau trying to block the owner from getting in the locker room. Thibodeau’s poor connection with Towns and, to a lesser degree, Wiggins, prompted suggestions from league insiders that he hire at least one assistant who can relate better to the younger players and serve as a buffer.

But Pitino believes Thibodeau will adjust at his next job.

Ostensibly, relationships should be less of an issue in New York, at least with the front office, because of Thibodeau’s familiarity with Rose and top executive William Wesley. Everybody understands what they’d be getting into. According to people who know Thibodeau, there’s a disconnect between his public persona — which is gruff, short and combative — and his easygoing personality in private.

“He has a great personality — and I told him this — let’s let everyone see it man,” Scalabrine said. “You don’t have to act like Bill Belichick all the time. You can coach like him, and act like Thibodeau.”

Still, Thibodeau is clearly fine with conflict and discomfort if it can promote winning. That could be the slogan for his coaching style — winning is hard.

“I think this is where management’s make mistakes,” Van Gundy said. “If you focus on everything should be kumbaya and we should eat dinner together every night and drink wine together, you lose sight of what you’re really there for — which is to try to improve and sacrifice and commit to one another so that the individuals can improve and play better and the team wins more. I think when you start taking the focus off those things you can get muddled down in stuff that does not matter. And only losing players think that stuff matters.”