Five people were killed and at least 21 were wounded — including three cops — in a wild West Texas shooting spree by a lone gunman finally slain by police Saturday in a movie theater parking lot, authorities said. 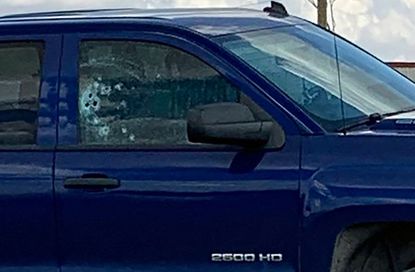 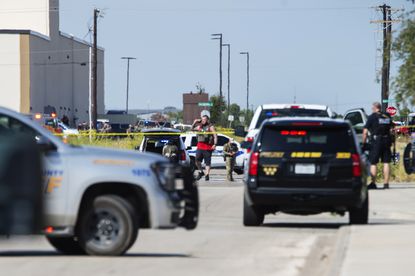 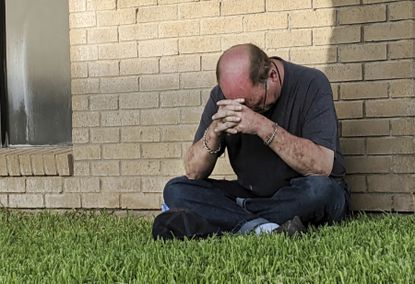 The bloodshed began about 3:13 p.m. when a pair of Texas state troopers stopped the shooter for failing to signal a left turn on an interstate highway between the cities of Odessa and Midland, said officials.

The driver aimed a rifle at the rear window of his car and blasted away several shots at the troopers, wounding one of them.

He then sped off.

The fleeing suspect, firing randomly at cars as he drove the 20 miles between Odessa and Midland, later abandoned his gold Toyota and hijacked a U.S. Postal Service Jeep.

During the shooter’s run, he wounded two more cops.

At the end of the wild chase, cops trapped the man in the parking lot at Cinergy multiplex theater in Odessa where the movies playing included “Scary Stories to Tell in the Dark.”

There the shooter made his last stand.

“I heard a pop, and then I just see a bunch of gunfire going off,” eyewitness Alex Woods told CNN. “And then I could see the officer walking up to the mail van, and discharging his weapon into it ... It all happened so quickly. It was a lot to take in.”

The suspect was identified only as a white male in his mid-30s, and authorities were stumped as to a motive.

Odessa Police Chief Michael Gerke said a multitude of police departments combined to “find this animal and bring him to justice."

Gerke said, without going into detail, that “I have an idea" as to the killer’s identity. Cops were convinced the killer had no accomplice during his bloody rampage, Gerke said: “Once this individual was taken out of the picture, there have been no more victims.”

Fourteen of the wounded were taken to the Medical Center Health System in Odessa, a city perhaps best known as the home of the high school football team in “Friday Night Lights.” There were no details on their injuries.

Reports indicated a 17-month-old baby was among those wounded before cops took the gunman down. One of the dead was a student at Odessa High School, according to the school’s Facebook page.

The killings came exactly four weeks after a gunman opened fired inside a Walmart in the Texas border city of El Paso, killing 22 people.

Odessa resident Javier Joven, 54, was headed home with his wife from the grocery store when the couple drove right past the stolen mail truck. He noticed the man behind the wheel wasn’t wearing a Postal Service uniform, but initially thought nothing of it.

“We had no idea it had been hijacked,” Joven told the Daily News. “He was going east and we were going west. When we got home our son told us there was an active shooter, and we were just like ‘Holy God.’ We could hear the sirens all around our house.

"I’ve grown up in Odessa, and nobody really thought it would come here,” added Joven. “Everyone is really in shock.”

Michael and Erin McGuire of Alamogordo, N.M., were visiting family in Odessa and had stopped to pick up groceries when the gunfire erupted nearby.

“I noticed one loud pop, but my wife said she heard eight,” Michael McGuire, 34, told The News. “We probably saw a dozen police cars with who knows how many police officers inside.”

Local resident Dustin Fawcett recounted hearing a half-dozen gunshots ring out about a football’s throw away as he sat inside his truck behind a Starbucks in Odessa. A white sedan with its passenger window blown out drove past, and he realized, “Oh man, this is a shooting.”

The 28-year-old said a bleeding little girl was grazed in the face by a gunshot, but nobody else was injured. Authorities poured into the neighborhood, pulling out their rifles and vests as they closed in on the mail truck.