Hundreds of teen activists gathered in Brooklyn Friday to shine a light on communities of color disproportionately affected by climate change.

Across the river in lower Manhattan, tens of thousands of young people clogged the streets demanding a swifter response to rising temperatures. But in the shadow of the Manhattan bridge, about 150 young people made clear not everyone has been equally hurt by environmental dangers.

“It’s important for young people of color to stand up and fight for climate justice,” said Nyiesha Mallett, an 18-year-old art student at Cooper Union originally from Brownsville.

“Young people of color experience the brunt of the crisis because we’re not given the tools to combat climate change,” she added. “We live mostly in low-income communities and we’re doing battle with a lot of other things.”

Attendees, many of whom wore yellow t-shirts emblazoned with “Climate Justice Warrior” on the back, noted that Friday’s march fell on the second anniversary of Hurricane Maria’s landfall in Puerto Rico. The hurricane is part of the growing number of severe storms scientists have linked to rising temperatures.

Henry Colon, a 24-year-old from Puerto Rico, traveled to New York for the march to make new connections and spread the word about the lingering Maria damage in Puerto Rico.

"The problems are still there,” said Colon. “There are some people that still don’t have houses.” 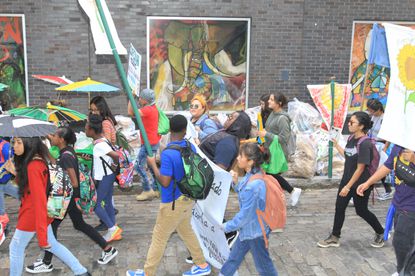 “We are in the Caribbean," he added. "The storms are going to keep coming.” 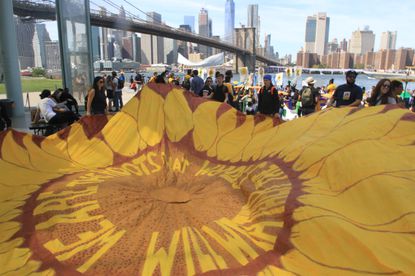 “You guys are the ones who are really going to make an impact and make a change.” 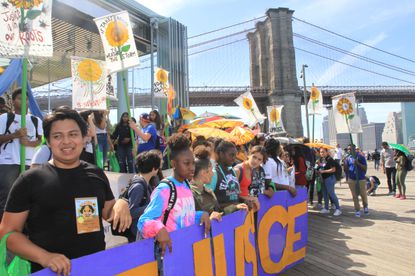 Onlookers who watched the group march by said they appreciated kids taking to the streets.

“Climate change is so important,” said Berk Kapicioglu, a 37-year-old on his lunch break. “It’s nice to have kids who are raising awareness.”