A hostage situation in Ukraine ended Tuesday after a hours-long standoff that saw a heavily armed man take 13 people hostage on a bus.

Ukrainian police in the city of Lutsk, about 250 miles west of Kiev, took the man into custody after negotiating with him for several hours. After he surrendered, officers stormed the bus and freed the hostages.

After the man, an ex-convict who was armed with guns and claimed to have wired the bus to explode, took the passengers hostage, police cordoned off the area. Though several shots were fired during the standoff, no injuries were reported.

Police identified him to BBC News as 44-year-old Maskym Kryvosh, a former con from Russia who has undergone psychiatric evaluation.

Authorities said the suspect has expressed discontent with “Ukraine’s system” on his social media pages. According to some reports, he has requested that local politicians, Orthodox church officials and oligarchs declare themselves terrorists in videos. He made several other demands, but most were not made public. 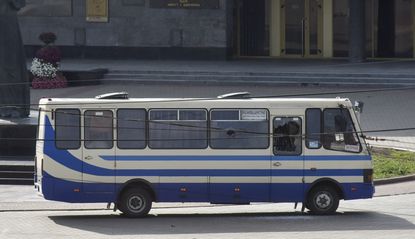 However, Viktor Kroshko, of the Volyn Oblast Police Department, said his demands were “rather vague.”

Ukraine President Volodymyr Zelenskiy fulfilled one of the gunman’s demands — to post a video online encouraging people to watch the 2005 documentary film “Earthlings,” an animal-exploitation documentary narrated by Joaquin Phoenix.

The post was deleted after the gunman was detained.

Deputy Interior Minister Anton Geraschenko earlier said the hijacker himself alerted authorities to the hostage situation, introducing himself in the call as Maksim Plokhoy. He said the moniker actually belongs to an author who has written an online book about life in prison, the Independent reported.

“For 15 years they’ve been correcting me, but I haven’t been corrected, on the contrary — I’ve become even more who I am,” the book reads.

The deputy interior minister also said Kryvosh had been convicted twice and spent about 10 years behind bars for offenses including robbery, fraud and illegal arms handling. He added that officials were told the bus had been rigged to explode and that there is another bomb he can detonate remotely somewhere in the city.

Geraschenko later posted photos of the suspect face down and surrounded by police on Facebook.

“The life of a person is the most important value. We have lost no one. Today the family and friends can be with everyone who suffered through the day in the bus under the gun sight. Terrorism has no place in any country,” President Zelenskiy wrote on his Telegram channel.