A Stuyvesant High School 9/11 survivor and advocate is calling a new HBO film about her classmates "irresponsible" for leaving out the devastating health impacts many of them have suffered.

The movie, called "In The Shadow of the Towers: Stuyvesant High On 9/11," debuts on HBO this week after a premiere set at Stuyvesant on Tuesday.

Lila Nordstrom, who’s dedicated much of her adult life to repairing the damage 9/11 did to kids at her school, had high hopes when producers reached out to her to explore the health impacts.

But not only did director Amy Schatz decide to leave that angle out of a film HBO’s publicity calls “a moving portrait of a community united,” Nordstrom told the Daily News producers failed to deliver on a promise to include a message at the end to direct people on ways to get help.

"To just exclude all that in this very high-profile project on it is irresponsible," said Nordstrom, who founded and runs the group StuyHealth.

Schatz told The News she is now in touch with Nordstrom “about the resources that will be available to accompany the film’s release.”

Nordstrom, who lives in California now, has dedicated much of her adult life to illuminating the health troubles faced by survivors of the terror attacks, particularly Stuy students who walked among rubble and dust to get to class, and were told it was safe. Many of them have spread all across the country, and have not registered with the World Trade Center Health Program. There are no statistics on the health of former Stuyvesant students, but Nordstrom knows of at least 20 battling cancer, including five cases of blood cancer.

She thought a high-profile HBO project might help those people and other survivors learn that they share common health problems, and that there is help.

"I certainly expected that in telling any story about Stuyvesant on 9/11 that there would be some acknowledgement somewhere that there's a major part of the story that's an ongoing crisis," said Nordstrom, who was also writing to HBO in hopes of getting some last-minute addition to inform people. 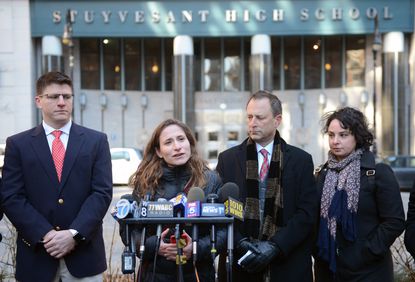 She said she was especially stunned that the movie went to such lengths to skip over health issues even after one of the main subjects of the work, Catherine Choy, died this year of 9/11-linked cancer.

Choy and a group of other Stuyvesant students caught the world's attention by writing a moving play about their experiences after the attacks. They form the backbone of the film. The end of the movie includes a where-they-are-now segment in which Choy participated before she fell deathly ill with gastric cancer. Nordstrom testified to Congress in June about Choy’s death. Yet, there’s no hint of that in the film until a dedication to Choy after the credits. It says only that she died of cancer, with no mention of the link to her exposure to Ground Zero.

"I was dismayed to see how egregious the omission was when I finally saw the film," Nordstrom said.

Under the health and compensation laws passed Congress and renewed permanently this summer, people who lived, worked or went to school south of Houston Street after the attacks are eligible for government-funded monitoring and treatment because they are at risk of developing diseases related to exposure.

Nordstrom hoped that message would get out, and said its omission harms people.

“It has health impacts on our community to not have that story well understood, and not have that story be well respected,” she said. "To have a story this public get told about the incident where it’s not even a footnote in the story, even though it is the main crisis facing this community at this moment, it’s sort of devastating for us.”