Staten Island District Attorney Michael McMahon said he does not plan to prosecute any officers he believes accidentally violated the city’s new “diaphragm law” which prevents cops from sitting, or kneeling on a suspect during take downs, claiming that the legislation “defies common sense.”

In a statement Friday, McMahon said he doesn’t intend to follow the letter of the law in cases where cops are accused of putting pressure on a defendant’s neck, back or chest, which could interrupt oxygen and blood flow.

If a cop unintentionally puts pressure on a suspect’s diaphragm during a struggle, McMahon said he wouldn’t prosecute. If it’s revealed that a cop purposely did so, then they could be charged with violating the diaphragm law, he said.

McMahon said the law is so open-ended that cops automatically face misdemeanor charges if they’re accused or recorded putting pressure on the suspect’s neck, back and chest as they try to subdue a subject, whether unintentionally or not.

“(It) actually defies common sense in the restrictions it places on police officers who we expect and need to respond to dangerous and critical life and death situations,” he said, adding that the law may be unconstitutional. “What it is doing is causing law enforcement to question how they can do basic functions of their job like make an arrest safely in this city.”

“That impact hurts every New Yorker and makes us all less safe — particularly as we have seen violent crime spike in recent weeks,” he said, imploring the city legislature to “repeal or fix the law as soon as possible.”

McMahon’s words come a day after NYPD Chief of Department Terence Monahan was caught on video claiming that all of the city’s district attorneys have agreed not to prosecute cops under the new law.

“We’ve got every D.A. come out and say they’re not going to charge that,” Chief Terence Monahan said at a Thursday morning CompStat meeting, at which department brass discussed how cops are afraid of making arrests for fear that they will run afoul of the new law.

“We can’t be afraid to do what we do. We can’t walk away,” Monahan bellowed at the meeting.

The new reforms, inspired by the unrest over the death of George Floyd by cops in Minneapolis, also make it unlawful for NYPD cops to put suspects in a chokeholds, which are already banned in the department.

Floyd died after a Minneapolis cop kneeled on his neck for more than seven minutes.

The city’s new law has brought pushback from police departments outside the city. Yonkers city police and the Westchester, Nassau and Suffolk county police departments have directed officers not to take enforcement action in the five boroughs, fearing they could get into legal trouble. 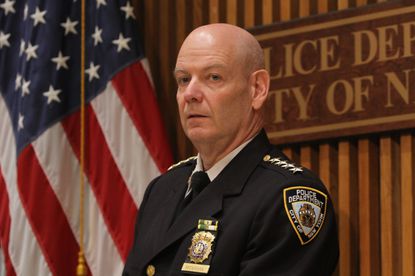 “Certainly there are going to be challenges regarding the ambiguity” between the city and state laws, Vance said July 8 on Inside City Hall. The remaining city DAs did not return comment Thursday night.

“I don’t know what’s worse — a roomful of NYPD commanders admitting that up until now no one has taken seriously the Department’s own Patrol Guide, or the Chief of Department telling cops to ignore the law because he thinks District Attorneys won’t enforce it,” said Lancman.