Anjelika Washington is opening up about the racism she experienced at the start of her promising career in Hollywood.

The “Stargirl” actress took to social media on Thursday to reveal that while on the set of a 2017 TV series, she came face to face with her stunt double — who was a woman in blackface.

Washington said the incident occurred during her fourth job as an actor and her first guest-starring role.

It was her “first time having a stunt double — and they painted her black.”

And to add insult to injury, she was belittled when she spoke up about it to a producer.

“I was very uncomfortable (as anyone would be to meet your double in blackface) so I spoke up for myself, I pulled one of our producers aside and asked ‘Why isn’t my stunt double black like me? Isn’t that the point of a ‘double?’” Washington shared.

“She responded ‘Sure. But we couldn’t find a black stunt double in LA. Los Angeles doesn’t have many black stunt performers. But aren’t you happy to be working? You should be thankful to be here.’”

The 22-year old California native admitted to internalizing the patronizing disregard and thought maybe she was overreacting.

She wrote: “I immediately started to question myself: “Do I sound ungrateful? Am I complaining? Maybe this is just how it is?” So I said “okay.”, I sat down in my chair, shut up, and tried to think positive thoughts. (Hence my smile in this photo) But really, I felt powerless, voiceless, and somehow ungrateful.... Anyone who knows me knows that “grateful” is one of my favorite words and feelings. So in this moment I felt like somehow I was in the wrong for speaking up for myself. But NO, she was wrong.”

She did not offer further details on which show the blackface stuntwoman was hired for.

But according to her IMBD page, Washington appeared in two episodes the short-lived six part 2017 drama series “Versus,” which focused on rival lacrosse players forced to play on the same team during an unprecedented summer tournament.

“See, there’s this oppressive thing that often happens when everyone and everything are ran by white people on sets (and in any industry) where they try to manipulate POC into just being GRATEFUL to be there,” Washington added in the eyebrow-raising caption. “They do this to us because they know that they *literally* run the show.”

“They feel like a savior for giving a young black girl a role in their show, even though most times it’s just to check a box,” she continued. “They often don’t check to see if we are comfortable with what they are asking of us, they often call us unprofessional or a diva for advocating for ourselves, and most times they get away with paying us wayyy less than our costars.... This is why being inclusive and hiring POC in front of the camera and behind it, is extremely imperative.”

She said she that since she “kicked ass” in the action scenes, the stunt double was not needed.

“But the thing is, the whole time I kept telling myself “I have to be great. No, I have to be better than great. I have to be so amazing that they don’t need her. No one can know that I have a stunt double in blackface.”

Washington, who also starred in the Marvel TV series “Runaways” and “Young Sheldon,” continued the discussion in the comments section of the post and even gave a nod to Oscar, Emmy and Tony Award winner Viola Davis when making reference to how black woman have to be twice and great to get half the opportunities and recognition.

“I have unfortunately experienced microaggressions and macroaggressions as an actor,” she continued. “None of it is okay. I have always spoken up for myself, but on this day I allowed someone else’s low value of me to override my high value of me. And unfortunately, on days when I don’t feel like educating, or exuding the energy of confrontation- I have allowed it to happen again. IT IS EXHAUSTING.”

After appearing in Lena Waithe’s inspirational Dove-sponsored series “Girls Room” earlier this year, Washington is getting some shine as DC Comics superhero Beth Chapel in the popular CW series “Stargirl” and has three other projects in the can.

She also can be seen in Nzingha Stewart’s teen romantic comedy “Tall Girl” on Netflix. 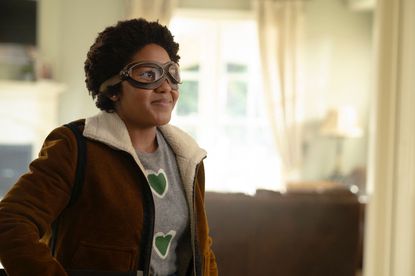 Making a vow “to never ever allow these types of micro & macro aggressions to happen to me again,” she encouraged readers of her post to do the same.