A Connecticut man who called himself “God” and insisted “White lives matter too” before using pepper spray on several Black and Latino men at a marina now faces assault charges.

Cops in Stamford slapped Steven Mike Dudek, 57, with multiple charges including a hate crime, authorities said over the July 4 weekend. One of the men he used the pepper spray on was an off-duty police officer from Bridgeport.

Dudek faces four counts of second-degree assault, first-degree intimidation based on bigotry or bias, and falsely reporting an incident to police, Stamford Police Capt. Richard Conklin and Lt. Tom Scanlon both said in a statement.

Dudek turned himself over to police and was later released on $25,000 bail, authorities said.

The arrest came two weeks after the incident on June 20, when Dudek approached the five Black and Latino men at the Cove Island Marina and accused them of trying to launch a boat illegally. 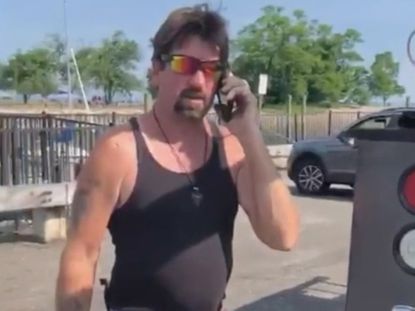 The men insisted they were only there to gather and meet up as part of a birthday celebration, and were going then leave for the beach, according to their attorney.

The confrontation with Dudek quickly spiraled into a racist attack, which was captured on video. In it Dudek is seen talking with police after calling 911, claiming he was “being harassed by a bunch of Black men.”

While he was on the phone, one of the men challenged his claim that they were doing anything wrong, and asked him his name. That’s when Dudek called himself “God,” and then after telling authorities he was being harassed, he insisted, “White lives matter too.”

“There was a verbal confrontation between the group that included comments of racial connotation,” Lt. Thomas Scanlon said in a statement. “This incident then escalated into an assault with a chemical spray against four individuals.”

In a part of the incident not captured on video, one of the Black men approached Dudek to try and calm things down, authorities said. That’s when Dudek used the pepper spray on four of the men, which included the off-duty police officer.

Dudek is set to appear in court Aug. 31.