Then-Commissioner Joseph Ponte hired consultant McKinsey in 2015 to help implement “an anti-violence reform agenda” as the troubled agency adjusted to oversight by a federal monitor. The first contract with the consulting firm was for $5.9 million.

By the time McKinsey’s work was complete in April 2017, its contract had ballooned to $27 million.

But internal DOC emails and court documents obtained by The News show staffers repeatedly questioned the McKinsey figures showing a drop in violence in some Rikers jails — including one stat touted by Ponte and Chief of Staff Jeff Thamkittikasem that reported a miraculous 70% decline in violence through what was called the “Restart” initiative at two Rikers facilities.

Senior DOC staff, including current Commissioner Cynthia Brann, appear to have given up referring to the 70% figure. The Restart program hasn’t been referenced publicly by the agency since mid-2017.

“We found there were significant errors in the McKinsey formulas,” a former senior DOC official said.

“We realized these numbers were not accurate.”

Behind the scenes, emails show Thamkittikasem and Ponte were included in discussions in early 2017 about McKinsey’s “erroneous metrics” that could not be reproduced by DOC staff.

“We are waiting on the documentation related to the nature of the queries and the methodology used to manipulate the data," then-Deputy Commissioner Shirvahana Gobin wrote in an email to McKinsey senior partner Benjamin Cheatham, in April 2017. She copied the note to Ponte and Thamkittikasem. 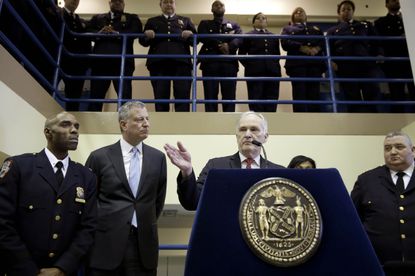 “As you can imagine, frustrations are brewing and time is running out.”

“Validity of currently reported data is questionable, and is not liable to stand up to audit,” he wrote.

Correction officials alerted McKinsey to the "erroneous metrics as early as March 2017,” he noted.

Gobin was among at least five DOC staffers who argued an invoice from McKinsey should not be paid because problems with its data were not resolved, emails show.

“We stand by the 70% number and consider this matter closed. Any allegation that DOC falsified data is patently false,” a DOC spokesman told The News on Monday. The agency said it could not withhold payments to McKinsey because the firm had fulfilled the terms of its contract.

Gobin, who resigned and was recently fined $20,000 for misuse of city resources in an unrelated matter, declined comment.

Thamkittikasem, now the director of the Mayor’s Office of Operations, is part of a task force dedicated to one of Mayor de Blasio’s most important initiatives: closing Rikers Island.

He played dumb in a Nov. 2018 deposition when asked if staff had ever questioned the data.

“Did anyone at DOC ever tell you that they did not believe the numbers or they thought the numbers were not accurate in any way?” attorney Rocco Avallone asked.

“Did anybody complain that the numbers were inaccurate?” Avallone asked.

“Internally, I don’t believe so,” he answered.

“Whatever data we brought we believed was accurate,” he added, referring to City Hall briefings on violence.

The emails and deposition were provided by former DOC sources who wished to remain anonymous. Thamkittikasem declined comment.

A top correction officer union official said it should have been a crime for Correction Department officials to play down the seriousness of Rikers violence with inaccurate data.

“If one of our Correction Officers did this, they would have been fired and immediately charged with a crime,” said Elias Husamudeen, president of the Correction Officers Benevolent Association. “Downplaying the rise in jail violence puts the lives of everyone in our facilities at serious risk.”

Sources working for DOC at the time said Thamkittikasem’s advocacy for McKinsey perplexed colleagues who questioned the quality of the firm’s work.

The company, which made $10 billion in revenue in 2018, has recently faced scrutiny for helping polish the image of authoritarian governments around the world.

In public testimony, Thamkittikasem touted the incredible decline in violence at the George R. Vierno Center and George Motchan Detention Center, which were pilots for the Restart model.

Thamkittikasem “reported violence in these units is down by over 70% and assaults on staff are down by 82%, as compared to other housing units,” according to minutes from an Oct. 2016 Board of Correction meeting.

The sketchy stat was cited again in a March 2017 budget report by the City Council’s Committee on Fire and Criminal Justice Services.

“Violence was down approximately 70% in the GRVC [George R. Vierno Center] Model Facility units in 2016 with McKinsey’s support,” the report noted.

On May 8, 2017 – over a month after being alerted to the issues with the violence stats — Ponte went before the same committee and cited the same figure to describe declines in violence at four Rikers facilities.

A source said DOC abandoned those stats only one month later. The News was unable to find any mention of the figures in public testimony or reports to various oversight agencies after that period.

Commissioner Brann described a “sudden spike in violence” at GMDC [George Motchan Detention Center] in the summer of 2016 in a July letter to the Board of Correction, seemingly contradicting earlier statements about the decline in bloodshed.

The claim of a 70% reduction in violence does not appear in any of the federal monitor reports.

Around the same time Ponte and Thamkittikasem touted the decline in violence through the Restart model to the Board of Correction and City Council, the federal monitor reported violence in many of those same facilities was up — and missing documentation.