A trailblazing Houston law enforcement officer was killed in the line of duty Friday.

Sandeep Dhaliwal, a 10-year veteran of the Harris County Sheriff’s Department, was fatally shot and killed during an afternoon traffic stop in northwest Houstonn, the department confirmed.

Dhaliwal was the first member of the city’s Sikh community to become a Harris County deputy, Sheriff Ed Gonzalez said.

He was a father of three.

“He’s very respected,” the sheriff said. “A leader in every sense of the word.”

“We ask you to support the family because they’re devastated. We’re a family. We’ll pull together during this difficult time.”

Deputy Dhaliwal was shot in the process of a traffic stop “at least a couple of times” from behind in a “very ruthless, cold-blooded way,” Sheriff Gonzalez said.

A suspect, who reportedly had a warrant for parole violations, and a woman believed to have been a passenger in the car were taken into custody.

Sim J Singh, Senior Manager of Policy and Advocacy for the Sikh Coalition, the nation’s largest Sikh civil rights organization, said Deputy Dhaliwal was a role model for the community.

“Our hearts and prayers are with Lt. Dhaliwal’s family in light of this tragic news," Singh told The Daily News. "He embodied the Sikh value of service and was clearly a role model for the Houston community and a trailblazer for Sikh Americans. While there is no established motive for his murder at this time, we have every confidence that the Harris County Sheriff’s Office will conduct a thorough investigation and provide more information soon.” 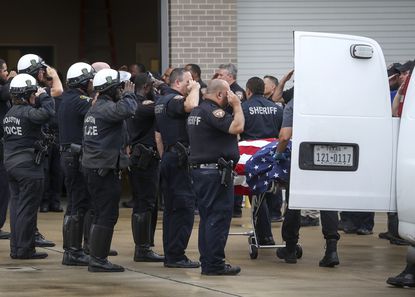 In 2015, the Harris County Sheriff’s Department became the largest sheriff’s department in the country to allow an observant Sikh to serve with his articles of faith, including turban and beard, as part of his uniform, when Dhaliwal received a religious accommodation to do so.