SEE THE TRAILER: More than 30 years after murder, Yusuf Hawkins documentary to air on HBO

HBO has debuted the trailer for the documentary “Yusuf Hawkins: Storm Over Brooklyn,” about the tragic, racist murder of the unarmed Black teenager 30 years ago.

Hawkins was a 16-year-old from Bedford-Stuyvesant who was with three of his friends in a heavily Italian-American section of Bensonhurst when they were stopped by a group of white men harassing Black men rumored to be dating neighborhood girls.

The men attacked the young boys and fatally shot Hawkins.

The two friends with him during the attack, Luther Sylvester and Bensonhurst native Russell Gibbons, are also featured in the documentary, which also includes interviews with defense attorney Stephen Murphy, Joseph Fama, who was convicted of the crime and the Rev. Al Sharpton, who became the family’s spokesperson.

It was during the peaceful protests for justice when racial tension in The Big Apple reached a fevered pitch and Sharpton was stabbed in 1991.

Amir Hawkins, Yusuf’s brother, maintains that the protests were crucial in making the community’s voices heard, proving that “There’s always strength in numbers.” “It’s important to remember Yusuf Hawkins, honor his life and be mindful that our martyrs have families who need our love long after the marching subsides,” Muhammad said with he announcement, of the film set to air Aug. 12 on HBO.

“This film ties together the past and the present showing how racism can rear its head anywhere, even in a liberal city,” he said. 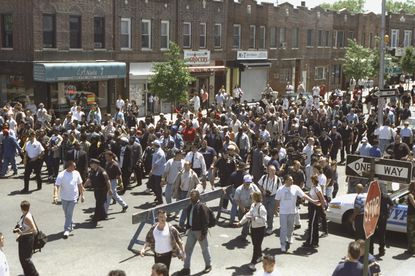 The retelling of Hawkins’ tragic story also sheds light on the recent racially charged killings of unarmed Black men, including George Floyd in Minneapolis and Ahmaud Arbery in Georgia.

On Wednesday, a new mural dedicated to Hawkins was erected in his Brooklyn neighborhood . 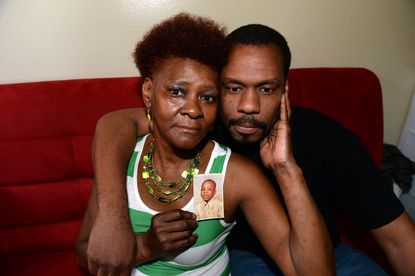 “Storm Over Brooklyn” will also be available on HBO’s streaming service HBO Max.