Ex-Wall Street trader Peyman Bahadoran lingers in a Bellevue Hospital ward, facing a lifetime of paralysis after he was shot in the spine by cops who believed — wrongly — that he came at them with a knife.

Bahadoran, 55, was suffering a mental breakdown around 6:30 a.m. June 4 when he entered the Healthy Green Gourmet deli at Third Ave. and E. 10th St. near Union Square, carrying a large Defender Xtreme serrated hunting knife in a sheath on his right side and walking his dog.

Bahadoran has been out of work on disability since 2013, and has a bipolar condition. He visited the deli at the height of the city’s George Floyd protests, during which cops and protesters clashed near his Union Square home.

“I was manic, paranoid, scared, anxious,” Bahadoran said of the protests’ effect on him. “You are watching everything. You are doing things that are not normal.”

At the deli, Bahadoran wanted to buy some Marlboro cigarettes. He largely declined to comment on what happened as he tried to make the purchase, but police said he menaced two officers who’d stopped in for breakfast.

Police also say Bahadoran menaced a store clerk with the knife when he demanded the smokes.

Bahadoran then left the knife on the store counter. At that point, Officer Jillian Suarez fired a Taser at him. Bahadoran says the stun gun’s darts missed him entirely because Suarez was too far away.

Surveillance video footage shows Suarez running out of the store and standing in the doorway while she radios in for backup with her hand on her gun.

Another store customer leaves the store and slowly walks away as if nothing is happening.

Seconds later, the video shows, Bahadoran emerges from the store with only a water bottle in his hands and confronts Suarez.

“I left my dog inside and I came out,” Bahadoran recalled. “And there was a cop with a gun out, and other cops.”

From there, it all happened in the blink of an eye.

The video shows Bahadoran approach Suarez, who has her gun drawn, and shoving her. They grapple momentarily, and he continues to step toward her as she backs away.

At the point his right hand drops briefly to his waist near the sheath. As other officers come running up, he turns and pushes a second cop, Lt. Luis Machado, who steps backward.

“I wasn’t pushing them. I think I was shooing them,” Bahadoran said. “It was like, ‘Get out of my way.’ I wasn’t attacking them. I’ve always been a law-abiding citizen. I just wanted to get home.” 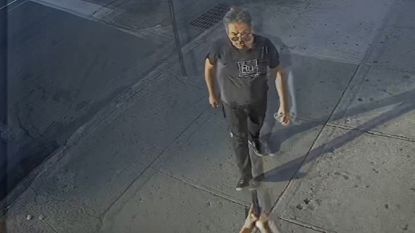 Suarez and Machado opened fire at Bahadoran at almost the same moment. The video shows Bahadoran falling to the ground in the gutter, face up.

Officers put tourniquets on his wounds and took his wallet, credit cards, keys, phone and his shoes, he said.

An officer told him he would be OK. Bahadoran asked to be taken to Beth Israel Hospital, where his daughter, now 12, had been born.

Instead, an ambulance took him to Bellevue.

When Bahadoran woke up, two detectives were standing over him. Despite his paralysis, his wrists and legs were shackled to the bed. 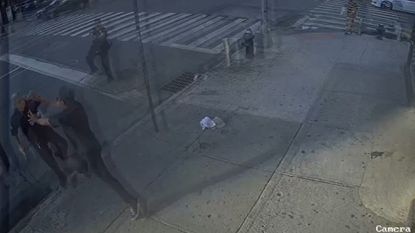 “I realized I’m paralyzed, and to me, being paralyzed and being dead is the same thing,” Bahadoran said. “Even though I couldn’t move they had me shackled.”

“They simply botched it,” said his lawyer, Earl Ward. “This is a case where they should have used their CIT (crisis intervention) training.

“They shot an unarmed man who posed no deadly risk to them and as a result they paralyzed this poor man.”

In a statement, an NYPD spokeswoman said cops were already in a heightened state of alert after an officer had been slashed in the neck hours earlier in Brooklyn.

“When responding officers arrived, they saw the individual motion toward a large sheath on his waistband,” said the statement.

Bahadoran “refused officers’ repeated demands to stop his aggressive advances,” the statement said. “The individual was then shot two times. Police later learned the knife was located inside of the store.”

Bahadoran said he doesn’t remember any warnings from police.

“I don’t understand how they (the NYPD) can say it was justified,” said Ward, of the firm Emery, Celli, Brinckerhoff and Abady. “I count one point where he touches his side, but when the first shot was fired there was no motion toward the sheath. It’s just a panicked reaction.”

A police source familiar with NYPD procedures and tactics in situations involving emotionally disturbed people said the use of deadly physical force in this case was not within department guidelines.

“He had no weapon, so there was no imminent threat. In the NYPD, you are taught to watch the hands,” the source said. “The female officer who was pushed did not react to a weapon, but to his anger and noncompliance. It appears that they fired out of fear rather than a deadly threat.”

Several other current and retired detectives agreed. “It’s not a justified shooting because he has nothing in his hands,” he said. “We have to articulate some way that they saw a deadly threat, and here there’s clearly no threat of serious physical injury. You need more than pushing.” 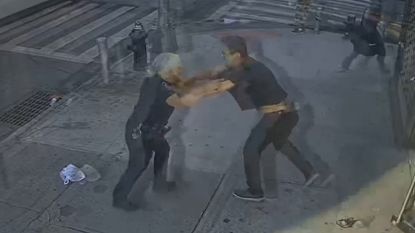 However, Eugene O’Donnell, a retired NYPD captain now at John Jay College, said in his view Bahadoran was close enough to both cops to grab their guns. “He’s charging her in a most threatening way; there’s no innocent explanation for that,” he said. “He’s within a nanosecond of having the firearm if he wants it. He then shoves another cop.”

Bahadoran was born in Iran and his family emigrated to the U.S. in 1983. His father was a doctor, and his mother was a lab technician. He earned a BA in finance and real estate at the University of Wisconsin and an MBA from the University of Pittsburgh.

From there, Wall Street beckoned. Bahadoran was an equity derivatives trader for Cantor Fitzgerald, the Maxim Group and other firms.

Later in life, he developed a bi-polar condition and has been out on disability since 2013.

Bahadoran says the Sept. 11, 2001 attacks affected him, as did working a few years later at Cantor, which lost 658 employees in the attacks, and his separation from his wife. One symptom was paranoia, another was the inability to sleep.

In the days before the shooting, his condition erupted, pushed by Floyd’s killing and the chaos of the clashes between cops and protesters around Union Square.

“There were riots outside my window. There was tear gas and rubber bullets,” he said. “I would turn off the lights and sit. I was afraid someone was coming to knock down my door.”

The day before the shooting, he was so fearful, he couldn’t bring himself to leave his apartment to walk his dog.

Bahadoran still faces an open criminal case for menacing a police officer and attempted robbery of the cigarettes, with his next court date Thursday. He’ll likely have to appear from the hospital.

He now fears infection, and worries about his daughter.

“My daughter is devastated,” he said. “She can’t believe her father is shot. I always talked to her about civil society and you have to obey the laws and the rules.”