Cops are hunting for a 25-year-old man caught on video repeatedly stabbing his ex-girlfriend on a Bronx street in front of their infant son — who was sent tumbling to the sidewalk when his stroller tipped during the crazed attack.

The infant somehow escaped injury and his mother, 21, is expected to survive the horrific ordeal.

The woman was attacked around 7:10 p.m. Tuesday as she pushed the stroller on Sedgwick Ave. near Giles Place in Kingsbridge Heights.

Ex-boyfriend Carlos Gonzalez got angry because the young mother wouldn’t comply with a request of his, said police.

Gonzalez went berserk, said cops. They say he pulled his ex to the ground with a chokehold and repeatedly stabbed her.

As the mom fell to the ground, she kept her grip on the stroller, which toppled over. Her infant son didn’t fall out, said police.

Mother and son were taken to St. Barnabas Hospital.

Cops say Gonzalez lives in Manhattan. He is described as 5-foot-10 and 140 pounds with long black hair in braids and a medium complexion.

Anyone with information is asked to call Crime Stoppers at (800) 577-TIPS. All calls will be kept confidential. 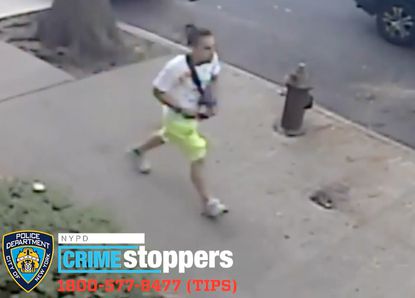