A 72-year-old woman on her way home from work was killed by a hit-and-run driver in a Queens crash early Tuesday, police said.

Gilda Lascano, a cleaner for an Estee Lauder counter in Manhattan, was riding in a Honda SUV headed north on 125th St. in South Ozone Park when a Lexus headed west on 111th Ave. blasted through a red light about 1:25 a.m., cops said.

The Lexus slammed into the Honda and then into a storefront, leaving both vehicles mangled wrecks.

“The car that they were in, the back end was completely destroyed," neighbor Joel Rios said of the victim’s vehicle. “You could only see the frame.”

“The silver Lexus, you could tell it hit it, and it hit it hard,” he added. "The Lexus was in the middle of the road. The whole front was damaged. The driver for the Lexus wasn’t there when we came out.”

Lascano, a native of Ecuador who lived in the U.S. for 38 years, was ejected from the Honda and died at the scene. The 56-year-old woman driving the Honda was taken to Jamaica Hospital in critical but stable condition.

“A few people were saying the lady under the truck was still alive so I wanted to see if she was breathing," Rios said of Lascano. "I called out to her but she wasn’t responding, there wasn’t any movement in her chest . . . Our neighbors told us it was their mother, and her friend was dropping her home from work.”

The Lexus driver abandoned the wrecked vehicle and ran off. Cops are still seeking the driver.

“It’s just something you don’t want people to see, especially after you hear it’s a neighbor," Rios said. “It was disturbing to me . . . It was just so surreal. There were cars stopping to see what was going on and I was trying to direct them around.”

“Who runs from an accident when they see a person dying? This intersections here is horrible, guys running red lights, going 90 mph," said Antonio Vargas, 47, Lascano’s son-in-law. “She was a hardworking woman, she was going to retire in a few months. She was a loving person and she died like that. She was like a mother to me, for 30 years. She always defended me, always took my side. She loved me. I’m just in shock.”

Neighbors were awoken by the tumult.

“I was sound asleep and then I heard a crash," said the owner of Elegant Floral Design, who lives above the store where the cars crashed. "The bang was really loud. It sounded like it was in the shop. When I saw the car, I called the cops. There were pieces everywhere. It stopped right in front of our gate. It had gone onto the sidewalk.” 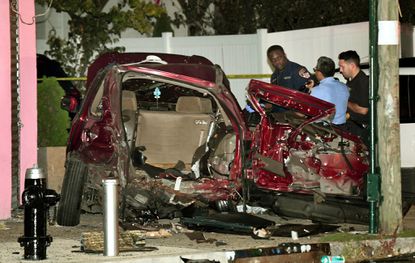 Lascano had flown out and landed under the tires of a parked car on the corner.

“When I ran down, I saw the woman lying under a car, her feet were hanging out," said the flower shop owner, who declined to give her name. "Her bag was in a different place and her shoes were in a different place. It was crazy. I knew she was gone. Her face was bleeding and everything.”

“The lady that was driving, she was pinned in the car," the flower shop owner added. "She was screaming. She was tilted over and screaming and the alarm was going off. She couldn’t get out. The cops had to cut her out.”