A 150-pound sea turtle with a spear lodged deep into its neck was spotted Saturday by a passing boater near Key Largo, Fla., according to a Key West turtle hospital that nursed the animal back to health.

The pike went deep into the animal’s frame, spanning more than half its body, an X-ray revealed. But veterinarians at the Turtle Hospital in Marathon, Fla., leaped into action to save the green turtle.

The reptile, named Splinter, was in stable condition, the hospital said.

It was the second time this summer a turtle turned up in the Keys with a spear in its body, according to the Turtle Hospital. Another was found dead in Biscayne National Park.

When the boater stumbled upon Splinter, black rope attached to a buoy entangled the turtle’s body.

“It’s highly unlikely this was an accident as the turtle has an injury on its plastron that looks like someone tried to spear her on her underside as well," Bette Zirkelbach, the manager of the turtle hospital, said in an emailed news release. 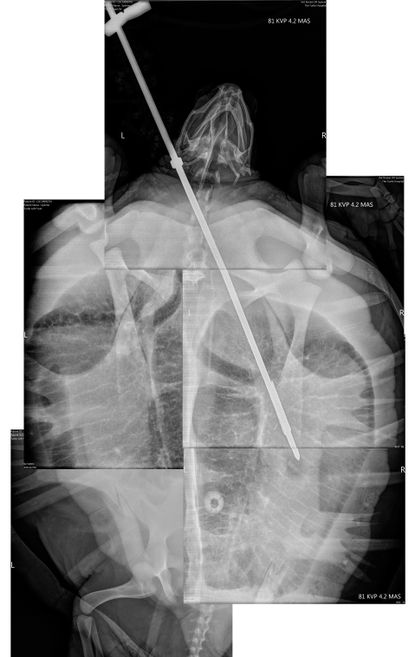 Authorities were investigating the apparent turtle attack. Sea turtles are listed as endangered or threatened. They’re protected by the federal Endangered Species Act and in Florida by the Marine Turtle Protection Act.

Veterinarian Doug Mader, who worked to save the turtle, said in the release it “is just a matter of healing before [Splinter] can be released.”