The makers of the hit television teen drama “Riverdale” are gaining some well-deserved respect for changing the rules of the game.

The cast and producers of the popular CW show, which is based on the characters of Archie Comics, will be the recipients of the Gamechanger Award at GSLEN Respect Awards at the Beverly Wilshire hotel in Los Angeles, Calif., on Oct. 25.

In the announcement, which was shared with media outlets in a press release Monday, the LGBTQ rights organization said that “Riverdale” would receive its “gamechanger” honor because the show exemplifies ideals that can make a difference in the LGBTQ community in the U.S. and around the world.

“Its portrayal of LGBTQ characters, their enduring and endearing relationships, and the way in which they navigate love and loss is truly a gamechanger for viewers of all ages and backgrounds,” the statement reads, making clear that the show is a perfect candidate to receive the honor.

"It's so powerful when LGBTQ young people can see their lives and experiences reflected on screen, and we look forward to honoring Riverdale with the GLSEN Gamechanger Award,” said Eliza Byard, the executive director of GLSEN. 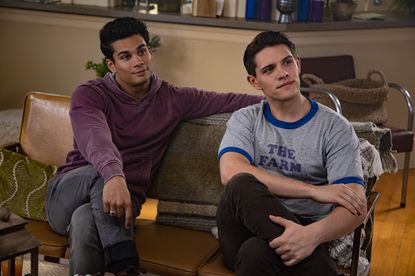 Held annually in New York and Los Angeles, the GLSEN Respect Awards showcase the work of students, educators, individuals and corporations who have significantly contributed to the lives of LGBTQ and questioning youth.

Besides the Gamechanger Award, whose previous awards include “Black-ish” and “Grown-ish” actress Yara Shaidi and singer and dancer Zendaya, four other awards will be handed out: Inspiration Award, Champion Award, Visionary Award and the Student Advocate of the Year Award.

In August, GLSEN announced that actress Octavia Spencer would receive its Inspiration Award, for devoting “her career to diverse storytelling, promoting social good, and is a steadfast ally for the LGBTQ community.”

Previously known as the Gay, Lesbian and Straight Education Network, GSLEN is the country’s leading education organization that advocates for a safe and inclusive environment for LGBTQ youth in K-12.

Starring a cast made up of ’80s and ’90s teen stars — Mark Consuelos, Mädchen Amick, Molly Ringwald and the late Luke Perry — as well as hot-newcomers-turned-television-idols, including KJ Apa and Camila Mendes, “Riverdale” returns for its fourth season on Oct. 9.