A new Queens elementary school was christened with the name of the late labor leader Héctor Figueroa on Tuesday.

Students and staff at P.S. 398 in Jackson Heights chose to name their school after Figueroa, who died unexpectedly in July at age 57, after learning about his life, said principal Erica Ureña-Thus.

“We held a final vote in each classroom, and our students made it clear the winner was Héctor Figueroa,” Ureña-Thus said. “I could not be more thrilled that we are honoring a man who gave so much not just to our own community, but across New York City.”

Figueroa took the helm of 32BJ SEIU in 2012, organizing tens of thousands of building cleaners, doormen and airport workers — and turning the chapter into one of the city’s most powerful unions.

He was a powerful backer of the campaign to boost the wages of fast food workers to $15 an hour.

At a celebratory event at the elementary school, with specks of the union’s trademark purple dotting the crowd and poster-sized renderings of Figueroa’s goateed face flanking speakers, family and friends said the school naming was a fitting tribute to the labor leader’s legacy.

The newly constructed school opened in September 2019, and features stairway guardrails in the same deep purple color as Figueroa’s beloved SEIU. It’s one of many ways the union president’s legacy will live on through the school.

“As long as I’m alive, I pledge to play my part to share Héctor’s story and vision with the students of the Héctor Figueroa school in a way they can relate to and can inspire them and give them hope," said McFadyen. 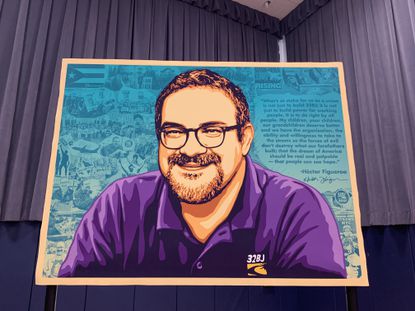