A long-time Queens high school math teacher brazenly plied his students with money, drugs, alcohol and good grades while keeping up a sexual relationship with one, according to a city investigation released Thursday.

Muhlbach’s Facebook account is cluttered with pictures of young women, some of whom he identifies as students. In one picture with two women posted in February, Muhlbach joked in a comment that he would bring one of them on a trip but worried whether he could “cross state lines” with her.

The math teacher’s pervy advances could be traced as far back as 2014, investigators said. That’s when he began supplying a teenage girl at the high school with alcohol and marijuana, according to the report.

He started a sexual relationship with the girl in January 2015, the former student, now a 24-year-old, told investigators. She eventually moved into his apartment, where he paid for a credit card and let her use his car.

The relationship only ended this year when she discovered Muhlbach was hiding her mail and planning to move to Florida, the woman said.

All the while, Muhlbach, who one student told investigators presented himself as the “cool teacher,” was recruiting new teenage companions.

Assistant Principal Maria Argyris contacted investigators in February to report that the parents of a 15-year-old girl discovered intimate text messages with Muhlbach, who called himself “mr.m," on the girl’s phone. 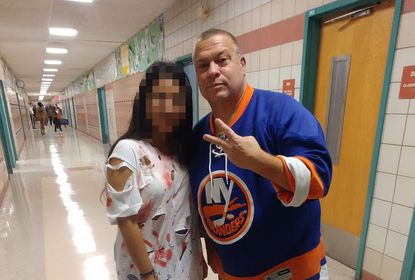 Muhlbach called the girl “mi amor,” telling her he “missed her” and hoped she would come visit him in Florida, according to the investigation.

He also gave one 16-year-old $20 in cash and posted an emoji with heart eyes on a racy picture that a female student put up on social media, the city said.

The teacher gave another girl $50 for her 16th birthday, and and reminded his teenage students they could go out for drinks after graduation and referring to some of them as “his wife” in front of his entire classroom, the report found.

When money or booze wouldn’t suffice, investigators, said Muhlbach turned to the other tool at his disposal: grades.

The parents of a 15-year-old in Muhlbach’s class grew suspicious when she earned As in his math course while flunking all the others because of numerous absences. One female student told investigators “if you were pretty and a girl, Muhlbach would offer to give you ‘whatever grade’ you wanted."

Investigators said Muhlbach was transferred from his teaching position to a central office in May, and retired from the Education Department in June. His Facebook page shows him living in Florida.

Muhlbach couldn’t immediately be reached for comment. Investigators said he declined to be interviewed through his attorney.

Education Department spokeswoman Danielle Filson called the allegations “deeply disturbing,” and said Muhlbach was "removed from the classroom and away from students during the investigation.”