The family of a 10-year-old Brooklyn boy crushed to death at a bus stop by a car that jumped a curb sought solace and answers Wednesday.

Victim Enzo Farachio was waiting for a bus in Midwood when an out-of-control Lexus SUV mounted the curb and plowed into him as he peered at his phone about 2:40 p.m. Tuesday. He was rushed to New York Community Hospital but could not be saved.

“I got a call and I went to the hospital and I saw my son was dead,” the boy’s grieving dad, Angel Farachio, said Wednesday. ”I’m heartbroken.”

The 59-year-old driver may have suffered a medical episode when he lost control of the car, authorities said. He was not immediately charged.

The driver and a passenger were both treated for injuries at Kings County Hospital.

Witnesses described a bloody scene along Ocean Ave. and Avenue L, where Enzo lay dying from head and neck injuries beneath crushed scaffolding.. His appearance was a sad contrast to the cap-and-gown photo his family proudly shared a day after Enzo’s death.

Relatives said Enzo was looking forward to his birthday Sept. 20 and had planned a trip to Six Flags Great Adventure.

Enzo had just started sixth grade at Intermediate School 240. His mother is a second-grade teacher at Public School 316, where Enzo was a student when he was younger.

"He was trying to be more independent by going on the bus by himself," the boy's mother, Mary Majao, told PIX11 Wednesday. 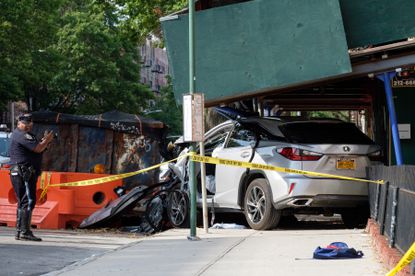 “I was crying all day because I have a son that age," said a worker in the building where Enzo’s family lives, just six blocks from where the boy was struck. "And he was just doing what he was supposed to do.”