Out with the new, in with the old as MTA puts 55-year-old cars on A, C, J and Z lines after contractor’s latest train screw up

Straphangers on the A, C, J and Z lines in the coming weeks can expect less comfortable rides — and potentially more delays — after the MTA pulled from service an entire fleet of new subway cars due to a problem with the cars’ doors.

Bombardier, the Montreal-based manufacturer of the R179 train cars, alerted transit officials of the issue on Tuesday. The Metropolitan Transportation Authority yanked them that night “out of an abundance of caution,” NYC Transit president Andy Byford said Thursday.

Byford said Bombardier has been sluggish in handling the issue, noting that the company initially promised to inspect all of the cars in a “matter of days.” But by Thursday afternoon, the company, along with its subcontractor and an outside consultant, had inspected just 24 of the 298 cars that were removed from service.

Neither Byford nor Bombardier provided an estimate as to when the new cars would be certified for safe use.

A pair of recent door malfunctions led the MTA to pull the entire R179 fleet from service, Byford said.

During the morning rush of Dec. 24, a southbound C train near High St. was pulled from service after a door remained open by four inches. And on the evening of Jan. 3, a train’s computer system did not register that a door had closed while it was at the Jay St.-MetroTech station.

The MTA will require Bombardier to implement a software upgrade on each of the train cars to prevent the issue moving forward — but none of the cars had received the patch on Thursday.

In the meantime, the MTA must run older, less reliable and less comfortable R32 cars on the affected lines — which has already caused some hiccups.

During Thursday morning’s rush, eight trains were delayed after a northbound C train running with 55-year-old R32 cars was removed from service due to a “smoke situation” at Fulton St., said MTA spokesman Tim Minton.

The R32 cars — the oldest rolling stock of any major subway system on the planet — often jerk when they start and stop.

“It’s not ideal having these old trains in service," said Byford. "They’re absolutely safe. Although they’re slated for retirement, they’re still in certification.” 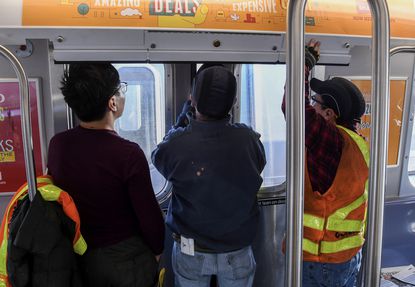 Byford, who has worked in senior roles at transit agencies in London, Sydney and Toronto, said he’s never had to pull an entire fleet of train cars from service. He said he would welcome other manufacturers to bid on future train car contracts.

Bombardier has for years bungled the delivery of the R179s. The company was supposed to deliver 300 of them by January 2017 — but did not fulfill the delivery until last month.