One dead, three injured after scaffolding collapse in Manhattan

A hardhat died and at least three other people were hurt in a chain-reaction accident Thursday at a Manhattan building undergoing facade repair work, authorities said.

Disaster struck at about 4:20 p.m. as a section of parapet fell from a 12-story condo building on E. 36th St. near Lexington Ave. in Murray Hill, said officials.

Debris from the parapet collapse slammed into a rig that held two construction workers who were making repairs to the facade near the building’s 11th floor, said Randy Kronish, a building resident. 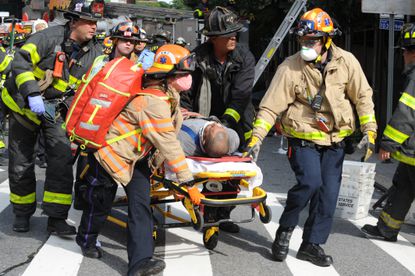 “It sounded like something bad happened,” said Kronish, who was in his 11th-floor apartment when the incident happened.

“The carriage [rig] was right by my window... The workers could see right inside,” Kronish said.

The rig, in turn, slammed into scaffolding below.

Investigators were still trying to sort out late Thursday whether the 50-year-old worker killed in the collapse was standing in the rig or on the ground. 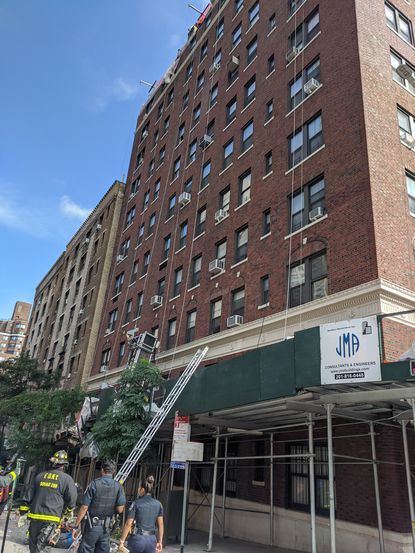 “We’ve done the securing that we can. Everything is currently under investigation,” said FDNY Asst. Chief Tom Curreo.

The workers were performing facade restoration work for Edras Group Corp. when the collapse happened, city Buildings Department officials said. A message to the firm was not immediately returned Thursday.

“They should have done something about the roof a long time ago,” Kronish said. “The building was in bad shape.” 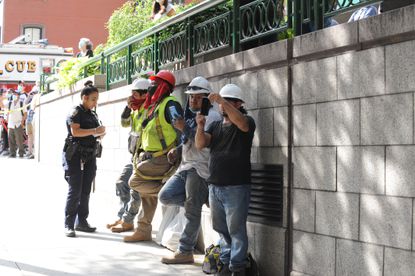 At least one worker has died in a construction accident in the city this year, Building Department data shows. David Johnson, 50, was killed as he worked Feb. 20 on the second floor of a building that was being demolished on Sutphin Ave. in Jamaica, Queens.

Johnson’s death is the only one recorded this year in city Buildings Department data last updated May 31.

Last December, architect Erica Tishman, 60, was fatally injured when terra cotta fell from the facade of a high-rise building at the southwest corner of W. 49th St. and Seventh Ave. in Midtown.