NYPD commish promises swift arrest for man who doused Bronx officer with milk: ‘People have to respect what we do’

The city’s top cop promised Friday that the man who threw milk at a Bronx police officer earlier this week “will be arrested." 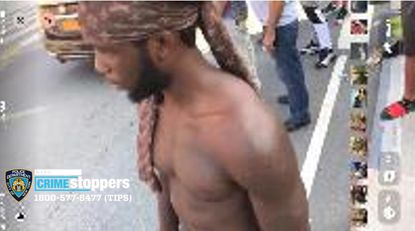 NYPD Police Commissioner James O’Neill, in a radio interview, also urged rank-and-file officers not to tolerate any form of disrespect.

“Actions like this have consequences,” O’Neill said on WFAN’s “Boomer and Gio” Friday, adding that he used to run the 44th Precinct where the Tuesday incident happened.

“These people just can’t walk away from something like that. They have to know that if they disrespect cops something is going to happen.”

Police were evacuating residents from a building fire on Grand Concourse near E. 172nd St. in Claremont around 5 p.m. when the crowd grew angry and demanded to be let back in.

At one point, a man came out of a nearby bodega and tossed an open half-gallon container of milk at one of the cops before running off.

Two people were arrested at the scene — Angelo Rodriguez, 18, who allegedly shoved a cop, and Rodriguez’s mother, Raquel De Jesus, 38, who ripped a body camera off one of the cops and threw it on the sidewalk.

The man who threw the milk was still on the loose Friday, O’Neill said.

The milky melee comes on the heels of several incidents over the summer of people dousing cops with water, angering police unions and NYPD brass alike.

“This isn’t something that’s new in 2019,” O’Neill said. “I’m glad it’s coming out and we’re not victims, but people have to respect what we do.”

Anyone with information about the milk tosser is asked to call Crime Stoppers (800) 577-TIPS. All calls will kept confidential.