The NYPD, accompanied by attorneys and video cameras, cleared about 50 protesters from City Hall Park in a Wednesday morning sweep about a month after the Manhattan encampment was launched, city officials said.

Several hundred cops in riot gear evicted the Occupy City Hall squatters with just one arrest for attempted assault and another six given minor summonses as the proponents of the defund-the-police movement were steered out around 3:40 a.m., according to NYPD Commissioner Dermot Shea.

The arrested man allegedly hurled a brick at an officer, denting the cop’s protective shield.

“A lot of planning went into it to make sure of the safety of the officers and the safety of the people who were in that park,” said Shea. “And the very good news is I’m not aware of any injuries to anyone. That’s paramount in this case.”

Mayor de Blasio collaborated with Shea in making the decision, with Hizzoner saying the final call was made about 10 p.m. Tuesday. Shea said the process went fairly smoothly, with most protesters obeying the police warnings and departing without incident.

“A number of individuals did not want to leave,” said Shea. “We did recover a number of bricks, sticks, brooms, some drug paraphernalia in some of the tents that were left. We gave people the opportunity to take their property.”

De Blasio said the decision was made as the number of park demonstrators waned and the homeless began taking their place. The police were accompanied by attorneys and the action was videotaped.

De Blasio said the threat of federal agents coming to clear out the park had nothing to do with the decision: “This is something that’s been discussed over several weeks, really looking at how this gathering had gotten really small,” de Blasio said.

Sanitation workers were on scene Wednesday morning cleaning up after the protesters were removed. 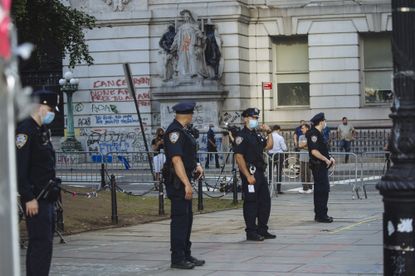 NYPD Chief of Support Services Raymond Spinella said the park would remain on lockdown until it was completely cleaned, which could take several weeks.

“We felt the time had come to end the occupation and allow cleanup crews to begin the process of removing the graffiti,” Spinella said.

The around-the-clock encampment had in recent days become a thorny issue for the mayor as many of the initial protesters exited, leaving behind what some saw as a lawless homeless encampment.

Cops gave the protesters about 10 minutes to leave before moving in. Officers were encouraged to wear riot gear “for the safety of our officers ... from past experience,” Spinella said.

During the occupation, police gave a handful of summonses for graffiti — with the markings still visible on the plaza where the encampment sprung up, as well as on the nearby Municipal Building and the Tweed Courthouse.

“There is a balance we always strike between the right to protest and especially public safety, and I always put public safety first while respecting constitutional rights,” de Blasio said Tuesday when asked about possibly clearing the encampment. “That decision will be made by the NYPD as things emerge. We’re looking at the situation every day.”

The new NYPD budget was pared by $1 billion, meeting some of the activists’ demands.