New York’s summer crime surge has many underlying causes — and crime data seen by the Daily News doesn’t fully support the idea that bail reform and the release of Rikers Island inmates in the coronavirus pandemic are totally to blame.

About 2,100 people busted for gun possession since the beginning of 2019 are walking the streets now, said Chief Michael LiPetri, the NYPD’s top crime strategist.

Just seven of those 2,100 people — not even 1% — have been linked to shootings since their release. Four of those have been charged, two are wanted, and one case is still being investigated, LiPetri says.

The coronavirus pandemic led the city to release 2,500 people from city jails in mid-March, data shows. Of those, 75% were convicted felons, the NYPD says.

Only 275 of those inmates — 11% of those released — have been rearrested and are charged with 550 different crimes, police said.

Though year-to-date shootings are up 63% and murders are up 27%, overall crime is down by nearly 3% this year, NYPD data shows.

It’s possible the surge in shootings coincides with a drop in gun arrests.

In response to the “Defund the Police” movement and the civil unrest after the death of George Floyd at the hands of a Minneapolis cop, the NYPD disbanded its undercover anti-crime units on June 15.

Since then, gun arrests have plunged. NYPD cops made 29 gun arrests in the week ending on July 5, compared to 70 the same week in 2019 — a 62% decline, police data shows.

The number of people charged with gun possession fell 49%, with 52 charged in the week ending on July 5 this year. There were 103 in the same period last year, last year, data shows.

The surge in shootings has many causes, Mayor de Blasio suggested at a news conference last week.

“There’s not one cause for something like this. There’s a lot of different pieces,” the mayor said, speaking of a spike in shootings in upper Manhattan. He went on: “The fact that the court system is not working, the economy’s not working, people have been pent up for months and months, so many issues underlying this challenge.”

In the middle of a pandemic, with civil unrest and oppressive heat, the city exploded violence last Sunday, with nine people shot dead.

Sunday’s deadly 24 hours capped a weekend not seen in a generation, with 11 murders — 10 of them by gunfire. Sixty-four people were shot across the five boroughs in 48 different incidents, say police.

During the same three-day span in 2019, the city saw just six murders, with 16 shooting incidents and 21 people shot.

To get back on that kind of track, the NYPD will flood crime hot spots, including in Harlem.

Since last weekend, police have made just one arrest connected to the spree of gun violence, for a non-fatal shooting. 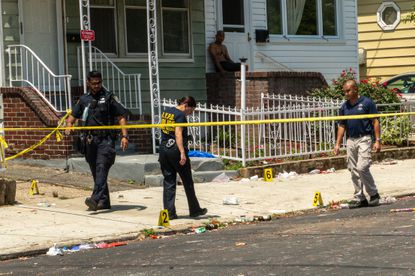 LiPetri wouldn’t say if police have recovered any guns linked to the mayhem, but he did say that “multiple suspects” in a number of the shootings, including some of the murders, have been identified and cases against them are being developed.

Half the shootings have been linked to street crews or gangs, and about six were drug-related. The latter is no surprise, LiPetri said, given that only drug suspects labeled major traffickers can be jailed under the new bail reform laws.

Some of the gang shootings were revenge for prior shootings, LiPetri said. A double murder in the Bronx last Sunday night — less than three hours after another man was gunned down in a drive-by while walking with his 7-year-old daughter — may have been retaliatory, he said.

Though the anti-crime units are gone, police will respond to the surge in street shootings and murders.