More than one hundred students demonstrated outside Pace High School in lower Manhattan Monday morning to protest the lack of sports opportunities for black and Hispanic students in the city’ racially imbalanced school system — the fifth walkout in a weekly series of “strikes for integration.”

Pace, where close to 90% of students are black and Hispanic and about 80% get free or reduced-price lunch, has only eight sports teams through the city’s Public Schools Athletic League. Eleanor Roosevelt High School, a 66% white school in the same district with a smaller student body, has 16 teams.

“It’s such a great school and great curriculum,” said Ciasia Joseph, a Pace freshman. “We just need more resources” for extracurricular activities like sports, she said.

Roosevelt, which previously didn’t have a full-size gym space, recently announced a $6.5 million new gymnasium. Students at Pace, meanwhile, say the outdated gym in the Lower East Side building they share with two other schools isn’t up to the task. The school recently got a scoreboard, after having to display the score with a computer projector during basketball games, said Joseph.

“What took us so long to get our scoreboard?” the freshman asked.

Black and Hispanic students are twice as likely as their white and Asian counterparts to attend schools with no PSAL teams, according to the Fair Play Coalition, a group of students, advocates and lawyers who’ve pushed the Education Department to reform the system for assigning sports teams. 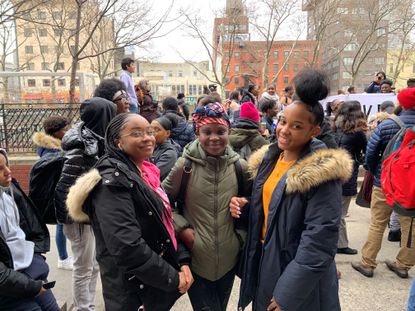 Some of the discrepancies arose from the shuttering of about 100 large under-performing high schools that disproportionately enrolled black and Hispanic students, and the opening of multiple smaller schools in their place. The smaller schools are less likely to be able to field a large array of sports teams.

But critics also say the PSAL maintains an opaque and confusing process for approving sports teams.

Antonio Reynoso, a Brooklyn City Council member who’s been vocal about leveling the PSAL playing field, warned the students outside Pace that “no one is going to give you anything. You have to take it.” Reynoso recently sponsored a bill that requires the Education Department to release more data about the distribution of sports teams.

In March, city officials introduced a pilot program for students at 26 small schools that added new teams and allowed students to join teams at nearby schools. But advocates say they’re still waiting for a citywide solution. Monday’s 45-minute walkout was part of a series of strikes at schools across the city organized by the advocacy group Teens Take Charge. Students are demanding the Education Department remove academic screens to spur high schools to enroll a more diverse mix of students.

In a statement, Education Department spokeswoman Miranda Barbot said "access to sports is critical for motivation, focus and success for students in and out of the classroom, and under this administration we’ve added hundreds of teams and piloted a shared teams model. We will continue to partner with students and staff to increase access for all schools.”