A worker at a Brooklyn smoke shop turned the tables on a gunman holding up the store Sunday, stabbing him with a box cutter, cops and the store's owner said.

The brave employee was alone in the store when the armed robber burst into Fifth Avenue Convenience, near President St. in Park Slope, around 12:20 p.m., demanding money.

The worker initially pretended he was helping the robber by leading him under the counter but then grabbed a box cutter and plunged it into the crook's gut, owner Bassel Tawil, 28, a cousin of the employee, told the Daily News.

"The (robber) had a hoodie on and I think he had a mask," Tawil said. "He got stabbed and he ran out."

Video shows the stabbed robber running from the store, joined outside by a man apparently acting as a lookout.

The gunman made it down the block to Carroll St. before he collapsed, witnesses said. The apparent accomplice ran off.

“I saw him lying on the ground screaming,” a 50-year-old witness who gave his name as Joseph said of the robber.

"I just applied pressure to the wound... just to keep him awake and alert. I asked if he knew who stabbed him. He told me no. I said, 'Just stay with me. Talk to me.'" 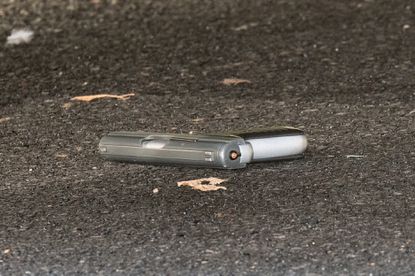 "People called for the ambulance and the police and they came within like a minute or two and they took him,” he added.

The robber was taken to New York-Presbyterian Brooklyn Methodist Hospital and expected to survive.

The store employee was cut on the hand and received stitches, Tawil said. He was being interviewed by police.