Brooklyn cops shot and killed a masked gangbanber who engaged them in a running gun battle early Monday, officials said. 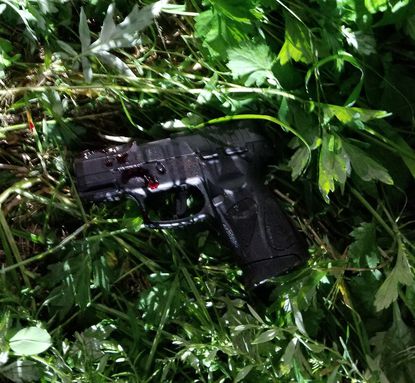 Police sources identified the gunman as Brandon Clayton, 29, a Bloods member wanted for violating parole in a gun possession case.

The wild shootout began about 2:30 a.m. when three cops came across Clayton, who they saw wearing a mask near Howard Ave. and Dumont Ave. in Brownsville.

Cops tried to speak with him. “He had his face covered walking down the street, which is kind of suspicious on a warm evening,” NYPD Chief of Department Terence Monahan told reporters.

Clayton — who wore a gray hoodie, blue mask and backpack — “removed a firearm from his waistband," said a transcript of police radio talk obtained by the Daily News.

He fled and then turned and fired gunshots at two officers in a police car, authorities said. The first report of shots fired came about six minutes after cops spotted Clayton, the radio transcript shows.

A third officer who left the car exchanged gunfire with Clayton, who continued to flee.

About 30 minutes later, a resident told police the gunman was trying to break into a backyard on Howard Ave.

By then, police were requesting that “aviation ... light up the backyard.”

Cops moving to get into the backyard found themselves boxed in by gunfire. They fired back, but were stuck in their positions.

Dozens of cops ducked on the street as multiple gunshots ring out in quick succession, video by a WPIX cameraman shows.

As a helicopter circled overhead, the cops rushed a white backyard fence, which they broke open and stormed through.

The gunman appeared to move from yard to yard, and continued to exchange fire with police until they reached him on Grafton St., according to the transcript.

Rounds fired by cops hit the gunman there at 3:17 a.m.

Eleven minutes later, police reported over the radio that Clayton was in custody.

He was rushed to Brookdale University Hospital where he died.

A blood-soaked semiautomatic handgun was recovered at the scene, cops said. In all, seven cops fired their guns. The police estimate approximately 55 rounds were fired by officers.

“I’m awfully scared. It’s very sad,” said Beverly Dehaney, an elderly resident awoken by the gunshots. “We should be living in perfect peace and quietness."

“The great work by our cops today demonstrates, once again, how they never hesitate to go into harm’s way to keep our city safe," Monahan said.