‘No one believes it’: Chrissy Teigen posts scarred boobs photo to prove she had implants removed

Chrissy Teigen can now comfortably lie on her stomach and feel comfortable in a bikini. Except no one believes her.

The former Sports Illustrated swimsuit model posted proof of her breast-implant removal surgery on Instagram over the weekend because “no one believes’ that her surgery was real.

She first announced her intentions to rid herself of a 10-year-old boob job back in March, had the surgery in June and has been happily recovering ever since, posting numerous photos of herself in various incarnations of bikini and toplessness.

However, apparently that wasn’t enough to convince detractors, so she resorted to revealing the grisly details. First came the scars.

“A few of my friends keep having to tell people that I really got my implants out because no one believes it,” Teigen, 34, posted in an Instagram Story video on Sunday, her yellow bikini top lifted to reveal the telltale marks. “These are the scars.” 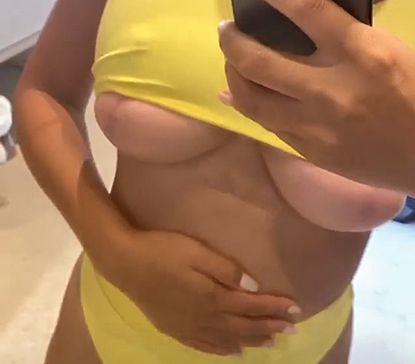 For those for whom TMI was not enough, there was the actual surgery prep.

“Trust me lol,” read the caption on another Instagram story showing the top half of her body marked up with a Frankensteinian array of Xs and dashes, ready to be sliced open.

Earlier this month, Teigen tempered the reveal with a happy photo of herself in a cheerful floral bikini, noting that it was the first time in a long time she had posed that way.

Teigen first revealed her intention in a March interview, explaining that she had had implants put in when she was 20 for a swimsuit shoot, but that now, at age 34 and after two children, she wanted them gone, saying, “I’m just over it.”

She had the surgery in June and said it went “great.”