ALBANY — As coronavirus cases surge across the country, New York met a grim benchmark Wednesday as the state reported more than 25,000 people have died from the respiratory illness since the pandemic began.

Another nine people died due to COVID-19 on Tuesday, bringing the official statewide total to 25,003, Gov. Cuomo announced as he urged New Yorkers to remain vigilant.

“New Yorkers brought the curve down by making big changes, and we see that work reflected in the numbers every day,” Cuomo said. “But we must continue to be smart - by wearing a mask, social distancing and washing our hands, we all have a role to play in protecting the progress we’ve made and leading the rest of the nation by example.”

New York was the early epicenter of the outbreak in the U.S., with nearly 800 people dying a day in April. 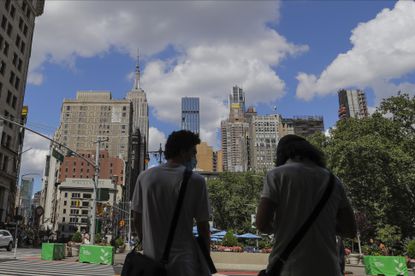 The State Health Department numbers lag behind those reported by John Hopkins University, which currently estimates New York’s death toll to be above 32,400.

Discrepancies in totals can be attributed to the state only counting confirmed coronavirus deaths, meaning a patient died after a positive test result. John Hopkins takes “probable” COVID-19 deaths into account.

Some areas in New York have also seen an increase in COVID-19 cases in recent days. The Capital Region reported a 2.1% infection rate Wednesday, a spike of 44 cases being attributed to the Fourth of July gatherings.

Still, the state’s overall infection rate remains relatively low in comparison to the skyrocketing numbers being reported in states such as Florida and Texas, which fast-tracked reopening efforts while New York took a more cautious approach.

Florida, for example, announced more than 15,000 new cases on Sunday, shattering the single-day case records in both New York and California.

On Tuesday, Cuomo extended a travel advisory requiring visitors from four additional states — New Mexico, Minnesota, Ohio, and Wisconsin — to quarantine for 14 days when they arrive in New York.

In total, anyone traveling from 22 states is now required to self-quarantine or face steep fines.

The governor also announced that New York is sending PPE and test kits to Atlanta as the southern city sees a resurgence of cases.

“We have people who have been through this and know how to fight COVID-19, and we stand ready to aid states and localities in whatever way we can,” Cuomo said.

The Empire State will share “expertise on contact tracing” and send thousands of test kits, gowns, masks, gloves and face shields, along with 1,250 gallons of hand sanitizer at the request of Atlanta mayor Keisha Lance Bottoms, according to the governor’s office.