‘My friend shot me and left me to die,’ NYC teen tells family before dying from accidental gunfire

Heartbroken Brooklyn mom Paulette Marshall doesn’t want to hear that accidents will happen — not with her teenage son’s funeral looming.

Marshall instead wants the youth accused of accidentally firing a bullet into her 18-year-old boy Christon Jarrett to land behind bars. She is especially incensed the shooter panicked and ran off, leaving her helpless son behind alone in the Flatbush apartment the teens were hanging out in.

“When it happened, everybody was frightened,” said Marshall. “Nobody expected it so they all ran away and left (Jarrett) there.”

Left paralyzed, her son clung to life for 29 days before dying Sunday.

Jarrett, known to his mom as “CJ," was hanging out with buddies in a friend’s second-floor apartment on E. 21st St. near Flatbush Ave. when Diop loaded a handgun about 10:40 p.m. Dec. 7, according to authorities. It accidentally went off and the bullet tore into the victim’s abdomen.

“The only reason for a gun is to kill," Marshall told the Daily News, speaking in her Crown Heights home. “You’re not going to war, you’re going to hang out with your friends.”

Cops responding to a 911 call found a bleeding Jarrett alone in the apartment. He was able to identify Diop, who lives around the corner from the building Jarrett was shot in, as the gunman, according to sources.

Jarrett was rushed to Kings County Hospital, where doctors were forced to partially remove his wounded colon. He also suffered a punctured intestine and was paralyzed. He died without ever making it out of the hospital.

“I spoke to him while he was on his death bed," Marshall said. 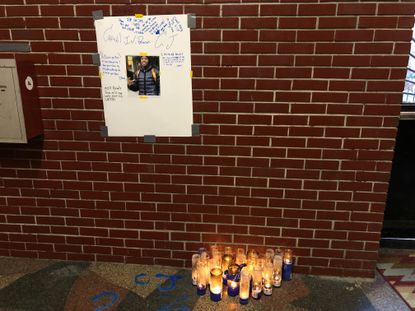 "At first the doctors said, even if he survived, he wouldn’t be able to walk because the bullet cracked the main bone of his spine. He was on sedation a lot but the doctors encouraged me to talk to him. Sometimes he could only shake his head or give you a thumbs up. That’s all he could do in the last three weeks.”

His funeral is set for Jan. 16 at Lenox Road Baptist Church.

Before Jarrett succumbed to his injuries, he was able to able to fill his mother in on what happened that night.

“There were like four friends in the apartment, with their girlfriends," Marshall said, relaying what her son told her before dying. “They weren’t fighting. They were just together, maybe drinking, smoking, playing loud music.” 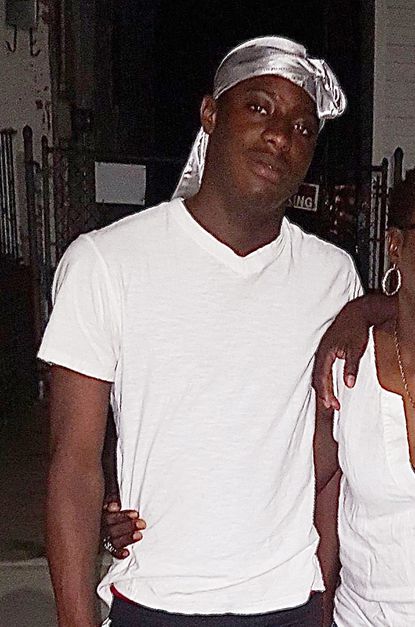 “(Jarrett) said this one guy came in with a gun and he emptied all the shots from the gun,” Marshall said. "There’s always one shot left in the end. If you’re not experienced or you don’t know a lot about guns, you wouldn’t know that one shot is in there.”

According to Marshall, Diop, believing he had unloaded all the bullets, playfully pointed it and pulled the trigger.

“I don’t know if (Diop) was laughing or joking or what but it went off and that was it,” she said. “(Jarrett) said he was sitting beside Diop so the blast was powerful because he was so close.”

Diop was arrested six days after the shooting and charged with assault, weapons possession and reckless endangerment.

“I don’t know where he got the money to pay his bail," Marshall said of Diop, who she has never met. "He could show up at the funeral and I don’t even know it’s him. That’s so crazy. He could walk by the house to see what’s going on and I wouldn’t know.”

“They need to get rid of all these illegal guns from these kids," Marshall said. "They don’t know how to handle them.”

Jarrett was a student at Pathways to Graduation.

“He didn’t deserve this,” his mother said. “He was on his way to graduating. He always said he wanted to own his own business. He said he wanted to open a sneaker store with all different brands of sneakers. He was fascinated by them.”

“I don’t know how or when I’m going to get over it,” she added. I miss him, you know? I would come home in the evening and we’d be talking all night, until 12:30, 1 o’clock at night. In the morning before I left for work, I’d talked to him. I miss that. I miss him eating all the meat out of the pot. I miss all these things. It’s like no more.”

“They’re not doing well, to see their smaller brother pass away over something so stupid," Marshall said.

Jarrett’s grandmother visited him during his final days.

“When I went to the hospital to visit him, he said, ‘Grandma, I’m sorry,'" the grandmother, who declined to give her name, recalled. "I said, ‘Sorry for what?’ He said, ‘My friend shot me and left me to die.’ And now that’s all I can hear in my head.”