A 56-year-old murder suspect has been added to the U.S. Marshals' 15 Most Wanted List two weeks after he and his wife made a brazen escape from a transport vehicle.

Blane Barksdale and 59-year-old spouse Susan Barksdale remain at large after authorities say they “overpowered and kidnapped” two security officers and a third inmate near Blanding, Utah, on Aug. 26. Cops say the Barksdales then drove to Vernon, Arizona, where they changed vehicles and abandoned the locked prison van with the three occupants still inside.

They were being extradited from upstate New York to Arizona when they made their escape. The Barksdales were arrested in May in connection with the murder of 72-year-old Frank Bligh in New York’s Monroe County.

Investigators believe that more than 100 weapons were stolen from Bligh’s residence, which was set on fire.

“I urge the public not to be deceived by the physical appearance of the Barksdales,” said U.S. Marshals Service Director Donald Washington. “While they may look friendly, both have demonstrated a propensity for violence and should be considered armed and dangerous." 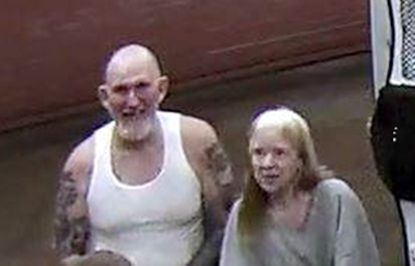 He added that the couple’s alleged “blatant disregard for human life and the law have made them both a priority for us.”

Blane Barksdale, who is 6-foot-5 and weighs 260 pounds, was added to the U.S. Marshals’ Most Wanted List on Monday.

They were last seen “possibly” driving a red GMC Sierra pickup truck with damage to the front passenger side and rear bumper with the Arizona license plate 127XTY, according to the U.S. Marshals Office.

Investigators said during a press conference on Monday that the Barksdales could be hiding east of the Arizona town of Snowflake.

The U.S. Marshals are offering a reward of up to $25,000 for information leading directly to Blane Barksdale’s capture, and they are offering up to $10,000 for help leading to Susan Barksdale’s arrest.

Anyone with information should contact the U.S. Marshals office.