The maniacal motorist charged with terrifying drivers across Queens before his car-crash killing of a new dad was behind the wheel without a valid license, authorities said Thursday.

Ramon Pena, 37, was charged with second-degree murder in the death of Hamlet Cruz-Gomez and an assortment of other counts linked to his road rampage Tuesday behind the wheel of a stolen delivery truck in Queens, said Queens District Attorney Melinda Katz.

As he sped through Brooklyn and Queens, Pena — a Bronx resident — collided with more than 20 vehicles, drove on the wrong side of the street and ran multiple red lights before plowing into Cruz-Gomez’s SUV, Katz said.

Pena was ordered held without bail by Queens Criminal Court Judge Mary Bejarano on charges of murder, manslaughter, grand larceny, felony assault, leaving the scene without reporting a death and an assortment of traffic violations.

Pena, who faces 25 years to life if convicted on the top count, was due back in court on July 10.

“This is a tragic incident that was caused by the alleged criminal actions of this defendant, who is accused of stealing a truck and causing extensive property damages to dozens of cars,” said Katz. “This depraved driving spree only came to an end after a horrible collision that killed a young man in his 20s.”

Cruz-Gomez, a 25-year-old father of a five-week old baby girl, was on a grocery store run for his family when his SUV was T-boned by Pena’s speeding stolen truck. He died at Elmhurst Hospital after going into cardiac arrest. 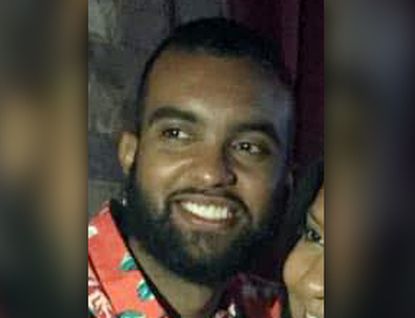 Cruz-Gomez, a Brooklyn resident, was a radiology technician at Montefiore Medical Center in the Bronx.

Pena, who stole the truck when it was parked with the keys left in the ignition on 101st Ave. in Jamaica, fled the crash scene on foot and was busted at the nearby Metropolitan Ave. subway station in Middle Village, police said.

Pena was not licensed to drive and never even had a record of driving a car anywhere in New York state, authorities said.

An ex-girlfriend said Pena is normally a safe driver, and that he must have been under the influence of a drug.

“He is not the monster they have made him out to be. He wasn’t himself,” said the ex-girlfriend, who asked not to be named.

“He was clearly under the influence of a very serious drug,” Pena’s ex added. “My heart goes out to the family that lost a child and his father. I’m extremely sorry to the victim’s family, but he was not in his right mind.”

Pena had worked in construction and as a sous-chef, the ex-girlfriend said. “He’s a wonderful person, very loving very caring,” she said.

Cruz-Gomez and his wife welcomed their daughter five weeks before the crash. Devastated family members wept inside a Brooklyn apartment over the timing and tragedy of his death.

“His soul was so good ... My heart is broken,” his sister-in-law Angelica Pena said earlier this week as the family prepared for a funeral shortly after marking the newborn’s first month of life. “I don’t know how we’re going to deal with this.”