The move comes a day after the Daily News published an investigation showing that managers at the depot for months declined to inform some 1,000 employees of the presence of potentially cancer-causing asbestos in their workplace air system.

Sources said that high ranking officials from the Metropolitan Transportation Authority and Transport Workers Union Local 100 on Tuesday surveyed the fan room at the depot where the asbestos was present. The group identified more than a dozen units where the asbestos cloth was frayed or deteriorating, and shut them down. Those units will remain turned off until the cloth is isolated and removed.

The MTA did not immediately respond to a request for comment.

The asbestos-filled cloth is designed to reduce vibrations on 57 noisy ventilation units in the depot’s fan room, which supplies air to the first three floors of the four-story depot. Since August those units have been covered in signs that read “DO NOT DISTURB OR TOUCH THE VIBRATION CLOTH. THE VIBRATION CLOTH MATERIALS ON THIS UNIT CONTAINS ASBESTOS.”

In February, a crew of workers flagged to the managers of the depot that the cloth was frayed on several of the units and dust that contained asbestos fibers was making its way into the depot’s air supply.

Sources added that cloth on roughly 20 of the units tested positive for asbestos since Monday. The units where the cloth was not found to be frayed or deteriorating will remain active, sources said.

Asbestos was also found in the depot’s boiler room in 2017, and was removed by August 2018, emails from high-ranking MTA officials show. At least 20 high school interns working in the depot may have been exposed to asbestos in the boiler room and fan room, according to people who supervised the children.

George Menduina, the MTA’s head of bus facilities, told The News that until recently he had no idea that asbestos was present in the fan room. The depot was built in 1947, and the majority of its ventilation system dates to the 1960s, years before heating and air conditioning professionals stopped using asbestos-containing materials.

“Everybody’s safe here,” said Menduina. “We’re coming up with a plan that is going to be short and long term [to deal with the asbestos].”

“These people are like my family away from my family,” Menduina said of his colleagues. “You’re dealing with someone here who means business, and I’m not looking to hurt nobody.”

The MTA’s acting head of buses Craig Cipriano released a statement on Monday stating that air quality tests were completed at the depot, and showed that there were no traceable levels of airborne asbestos in the depot’s air.

Menduina said that subsequent air quality tests completed Tuesday by a consultant also showed the air is safe to breathe.

Brooklyn Borough President Eric Adams and Councilman Rafael Espinal (D-Brooklyn), whose district includes the depot, will hold a press conference Wednesday morning with Local 100 officials to call on the MTA to take more drastic measures to mitigate the problem. The group will also call for the MTA to put workers who were potentially exposed to asbestos into a monitoring program that includes regular medical screenings an X-rays of their lungs.

The depot was crawling with MTA security personnel on Tuesday morning — The News observed 15 workers wearing security vests paroling the exterior of the building. 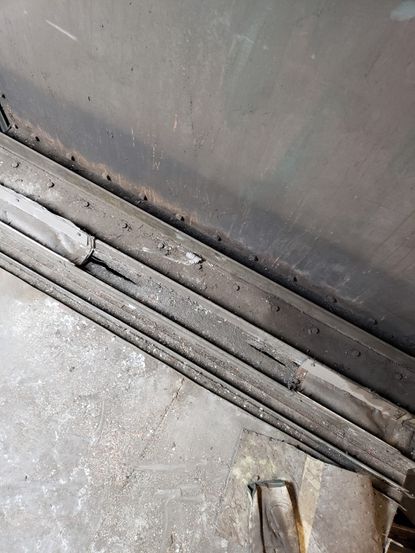