Lt. Francis Zaino, 65, who’s worked as a transit cop for nearly 39 years and is set to retire later this month, said he got a report at 2:10 p.m. Saturday of a man sitting on a platform at the station with his legs hanging over the tracks.

When he and another officer went to investigate, the man jumped onto the train tracks and pulled out a .40 caliber handgun and began to wave it around, point it at his own head and stick it inside his mouth.

The cops took cover, and tried to talk down the distraught 19-year-old gunman, who Zaino said appeared to be suicidal.

“He apparently had a fight with his father that morning,” said Zaino. “The game here was to take our time, maintain a safe distance and take cover.”

Sgt. Michael Arcati, 42, was also on the scene, and at some points said he was just six feet away from the gunman. He said the man asked him to call his father — and also asked for something to eat and drink.

Arcati and the other officers got on the phone with the father, and gave the suspect water and chips to try to calm him down. 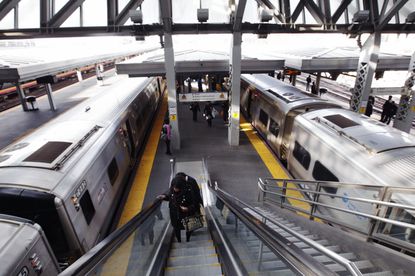 At around 3 p.m., the magazine slipped out of the man’s gun, and cops realized there were no bullets inside. They later found the gun’s serial number was defaced.

“He accidentally hit the release, the magazine came out, he knew it was over, he put his hands up,” said Zaino. “We assured him the whole time, ‘Just walk out of here with us, we can walk out of here like gentlemen.‘”

The cops arrested the man once they realized he had no ammunition and processed him at the nearby precinct, but sent him to the hospital for psychiatric care.

“We followed the textbook to a T and it worked,” said Arcati. “You’re cautious, it’s a man pointing what was perceived to be a live weapon in your direction, but instincts and training take over.”

Zairo and Arcati said the gunman’s father said his son had no history of mental illness, and was on the scene by the time the arrest was made.

The man was charged with criminal possession of a weapon, menacing, criminal trespass with a weapon and reckless endangerment, MTA officials said.