New York City’s transit network, neglected and underfunded for decades, is about to get an incredibly expensive shot in the arm.

The vast majority of the money, roughly $40 billion, will go towards New York City Transit, $37.3 billion of which will be used to pay for subway projects. For context, the MTA spent roughly $32 billion on its current five-year capital plan, which wraps up at the end of the year.

The plan also comes with funding for the next phase of the Second Avenue Subway, which will extend the Q line north by 1.5 miles from 96th St. in the Upper East Side to 125th St. in Harlem. The extension of the line will cost $6.9 billion, a whopping $4.6 billion per mile of track.

But the plan will be painful. Transit officials warned that the aggressive construction plan will lead to extended shutdowns of service on nights and weekends across some areas of the subway — but insisted the sacrifice will be worth making.

“Let’s be clear, re-signaling the subway is going to take the patience of New Yorkers," said NYC Transit president Andy Byford, whose “Fast Forward” plan released last year laid out much of the framework for the capital plan. "We’re not ruling out line closures, but the lesson with the L train project is that there are ways to avoid that kind of thing. " 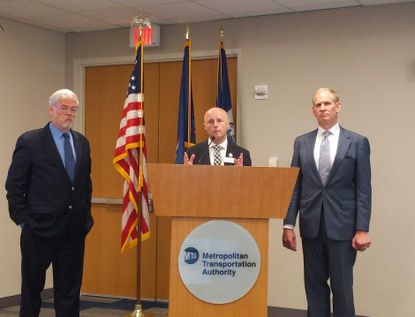 The MTA plans to add modern signaling systems to six segments of subway track that, along with new signals on the L and No. 7 lines and other projects underway, will give roughly half of the city’s daily riders speedier commutes, said Janno Lieber, the agency’s head of capital construction.

The areas that will get signal upgrades under the new plan are:

The next five-year plan will bring ramps or elevators to 66 new subway stations, and MTA leaders said they will begin work to make another four stations accessible by the end of 2019. Previous estimates only included 50 new accessible stations in the capital plan.

The plan is not final — transit officials must still get sign off from the MTA board state lawmakers, Mayor de Blasio and Gov. Cuomo. The plan is also subject to a state-mandated “forensic audit” of the agency’s finances, which could bring additional changes, according to Foye.

Specific details of the plan remained scarce on Monday — MTA spokesman Tim Minton said an itemized list of construction projects will be coming out in the next week.

To pay for the plan’s $51.5 billion price tag, the MTA will borrow $15 billion against the incoming congestion pricing scheme to charge cars driving in the busiest parts of Manhattan and another $10 billion against new taxes on internet sales and expensive real estate transfers.

The MTA is also banking on the city and state to pitch in $3 billion each, and the federal government to throw in another $10.5 billion. The remainder will be covered through government bonds, Foye said.

Members of the press were given less than 40 minutes to question MTA leaders on the wildly expensive plan, which will cost about as much as the annual gross domestic product of the nation of Lebanon.

“If the MTA is serious about public transparency, they will release an itemized list of capital projects now,” said Rachael Fauss, an analyst at good government group Reinvent Albany. Fauss added that the agency is still past due on releasing its latest 20-year needs assessment, a document that typically informs its five-year capital plans.

Despite the measly show of transparency, Byford said he was “ecstatic” about the plan.