Mom who stabbed, decapitated daughter because girl ‘asked for cereal’ gets life in prison without parole

A deranged Texas woman who stabbed and decapitated her 5-year-old daughter because the child “asked for cereal” will spend the rest of her life in prison after a jury found her guilty of capital murder on Thursday.

Krystle Villanueva, who also knifed her father-in-law in the gruesome 2017 assault, claimed during her two-week trial that she’d been “under the delusional belief” that the two victims had been replaced by clones and had to be killed to bring back her real family members, authorities said.

The Hays County SWAT team found the 27-year-old woman naked and freshly showered shortly after she killed Giovanna Hernandez and attacked the girl’s grandfather, who survived the stabbing.

The grisly assault happened about week after Villanueva, her daughter, her husband and his parents moved to a home in Kyle, a city near Austin and San Antonio.

“A case like this leaves an unforgettable mark on everyone involved, especially the child’s family," the county’s criminal district attorney, Wes Mau, said in a news release Thursday. “Every law enforcement member who worked on this case will forever be traumatized by what Ms. Villanueva did to her innocent daughter.”

The father-in-law, Eustorgio Arellano, called 911 on Jan. 5, 2017, to report that he had just fled his home because Villanueva stabbed him without warning in the back and head, according to the release. 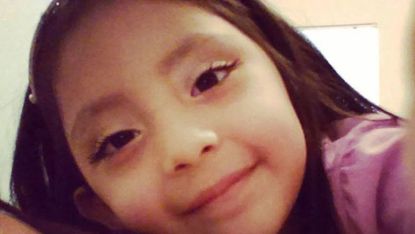 The cold-blooded killer also called 911 from inside the home, telling dispatchers she had just murdered her daughter because “she asked for cereal,” authorities said. SWAT officers rushed to the scene and broke into the home, where found the Giovanna’s decapitated body in one of the bedrooms.

Villanueva’s blood testing later revealed she had alcohol and marijuana in her system.

Her defense team conceded that she killed her daughter and stabbed Arellano, but they tried to convince the jury to find her not guilty by reason of insanity.

Evidence presented at trial did show that the woman had previously been treated for mental issues, but such treatment “coincided with prior drug abuse,” according to the release. Prosecutors also noted that the symptoms she described at trial had never been observed in her before or after her arrest.

A psychiatric expert who testified for the defense team also concerned that marijuana use “can exacerbate existing mental conditions and interfere with treatment,” authorities said in the release.

The jury rejected the insanity defense and the judge who presided over the case sentenced her to life without parole for capital murder of a child under 10 and 20 years in prison for the aggravated assault with a deadly weapon against Arellano.

“I commend all the investigators and officers who endured this horror with calm professionalism so that justice could be done,” Mau said.