A longtime Mets fan gave new meaning to the words “die-hard” after he was blasted in the face with a T-shirt cannon in Citi Field, knocking him unconscious and nearly blinding him, according to a new lawsuit.

Alex Swanson, 54, says the 100% cotton missile smacked him square in the eye, knocking him off his feet and leaving his retina dangling by a thread at a Mets shutout against San Francisco over the summer, according to the suit filed Friday in Queens Supreme Court.

It was a near perfect day on June 5 when he got to the stadium with his four sons, outfitted head to toe in fan gear.

The Smithtown, L.I., father of three said he and his boys were so conspicuous that a reporter with SportsNet New York interviewed them on their way into the stadium.

Everything seemed to be going their way. The Miracle Mets were up 6-0 at the seventh inning stretch as the T-shirt shooters made their way to where the Swansons were sitting on the Pepsi Porch.

Swanson walked down to the rail, hoping to add another shirt to his collection when the guy operating the T-shirt cannon seemed to be having trouble with his shooter.

The man lowered the muzzle to deal with the issue — and discharged the tightly wrapped jersey into Swanson’s face from 20 feet away.

The doting dad said he was knocked off his feet and fell backwards, hitting his head and blacking out.

“The guy who shot the gun scampered away,” Swanson said.

When he came to, he was surrounded by his sons and Mets support staff. He was taken to the nurses station, but refused to go to the hospital because he could still see, despite his eye being badly swollen.

A CAT scan the next day found he’s suffered a concussion and severe eye trauma that he still deals with to this day, said his lawyer Dustin Levine of Ancona & Levine in Mineola. His retina was nearly completely severed, left hanging by a thread, the suit claims. 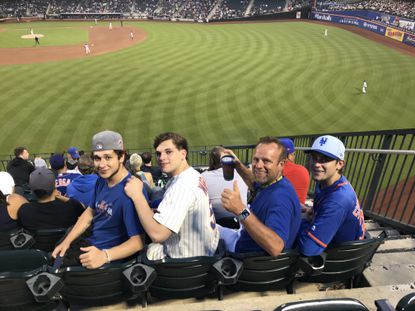 “I still have floaters — little black specks — over my cornea,” Swanson said. “The doctor says the retina could detach at any moment.”

“It’s like someone is shining a flashlight in the corner of my eye," he added.

He said the Mets back office reached out to him and offered him free tickets, but that’s not good enough for Swanson.

“First and foremost they should stop using that gun,” he said. “It bothers me because it could have hit a little kid. I don’t know why they use them anymore.”

The Mets did not respond to multiple messages left for comment.

A 2016 study of the dangers T-shirt cannons conducted by West Point Military Academy found they do indeed have the power to injure.

This past April, a woman sued the Houston Astros for $1 million after she claims her hand was injured by a T-shirt cannon.

The Texas team is fighting the suit.

Through it all, Swanson’s devotion to the Mets’ star players is unwavering.

“It’s not Todd Zeile’s fault or Todd Frazier, it’s the people who run the Mets,” he said.

His lawyer hasn’t put a price on Swanson’s injuries.

“I just want there to be accountability and just compensation for my client,” Levine said.