MeToo activist Katherine Kendall claimed in a court document that she wass “misquoted and misused” by British tabloid The Sun in an April 2018 article accusing Depp of physically abusing his ex-wife, Amber Heard.

The story also claimed that “Fantastic Beasts and Where to Find Them” author J.K. Rowling was being targeted by #MeToo activists for defending Depp, the star of the book’s 2016 film adaptation.

Depp is suing The Sun’s publisher, News Group Newspapers, and The Sun’s executive editor, Dan Wootton, in London over the article, which called him a “wife-beater.”

Kendall — who claims she was assaulted by sex offender movie mogul Harvey Weinstein — was quoted as saying, “It seems that Amber got hurt.”

“Although it was true that I was a victim of Harvey Weinstein, the rest was a lie,” Kendall said. “I was not ‘going public’ on behalf of #MeToo or myself, to criticize J.K. Rowling’s decision to cast Mr. Depp, nor did I accuse Mr. Depp of hurting Amber Heard, about which I have no firsthand knowledge.”

Kendall added that she heard “several times” that Heard was abusive to Depp. 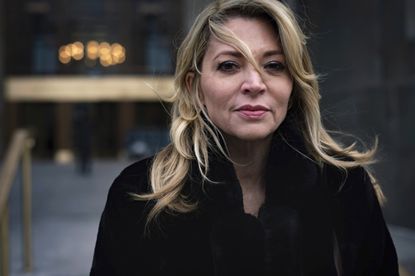 Also on Friday, Depp’s pal Isaac Baruch testified that there were no visible bruises on Heard’s face after she alleged Depp hit her in May 2016.

Baruch, who used to live in an apartment unit owned by Depp, ran into the pair in the hallway of thror building, People, magazine reported.

“Ms. Heard, whose demeanor I would describe at that moment as being very animated and in control, informed me that Mr. Depp had come by the night before and got violent,” Baruch’s witness statements read. “She told me that he hit her in the face and threw a phone at her. I then asked her where he had hit her and she stretched her neck and pushed out the right side of her head for me to look at her right eye.”

But Baruch noticed nothing out of the ordinary.

“I literally was around 12 inches from her, inspecting her face and I did not see a single mark or evidence of any marks, bruising or swelling of any kind anywhere on her face,” Baruch testified. His claim received corroboration from Laura Divenere, the interior designer who furnished the former couple’s Los Angeles penthouse. She testified in a written statement that she noticed no injury to Heard in the days after the alleged phone incident, according to Reuters.

Travis McGivern, a security guard for Depp, also testified on Friday that Heard spat at Depp and hurled a can of Red Bull at him during a fight at their home in March 2015, according to the Independent.

Although Heard claims that Depp struck her and pulled her hair, McGivern stated, “This did not happen and at no point did Mr. Depp hit Ms. Heard.”