Mass shootings costs US $229B a year, congressional report says

WASHINGTON — Gun violence in America not only costs the incalculable price of human lives, it also costs dollars and cents — $229 billion every year, according to a report released Wednesday by Congress’s Joint Economic Committee.

The report, assembled by committee Vice Chair Rep. Carolyn Maloney (D-New York) and released at a Capitol Hill news conference, highlights not only an estimated cost in every state, but also the fact those costs, in both dollars and lives, are lower in states with tougher gun laws like New York.

“The states with stronger guns — New York, Hawaii, Massachusetts — the gun death rates are way, way lower than states with virtually no gun laws and loose gun laws,” said Lori Haas, who became a gun violence activist after her daughter survived the 2007 massacre at Virginia Tech.

Overall, the report said gun violence costs at least $229 billion a year in direct and indirect costs. Citing data from the Pacific Institute for Research and Evaluation, the Giffords Law Center to Prevent Gun Violence, and the Centers for Disease Control, it added up lost income, employer costs, health care, and police and criminal justice costs, the total of which probably underestimates the true drain on society.

According to the report, the annual cost in New York for gun mayhem is about $5.6 billion, which gives it the third lowest per capita cost for gun violence in the country, and only about 0.3 percent of the state's GDP.

The five deadliest states in the report are all rural or southern, and have lax gun laws, with Alaska having the highest rates of slaughter, followed by Montana, Alabama, Louisiana and Missouri.

The report also points out that those high rates are not driven by high-profile mass shootings, or even crime. Suicide is the greatest driver of gun deaths. In Alaska, for instance, 70 percent of all gun deaths are people taking their own lives.

There is also a rising gun death rate among younger people. Compared to the rest of the high-income world, people between the ages of 15 and 24 are 50 times more likely to die from gun violence in the United States, and the 90 percent of all youth firearms deaths in the developed world come in America.

Again, Alaska leads the way in young people's gun deaths, with a rate that is eight times higher than in New York. Overall, it is again states with weaker guns laws that lead the way. Twenty-one states have gun death rates for younger people that higher than 20 per 100,000 residents, with states in the South and Midwest making up most of them. 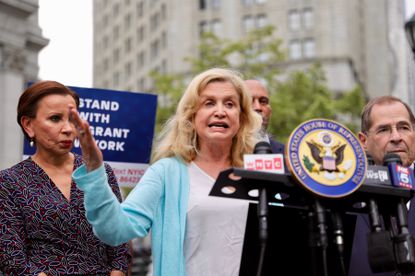 “If guns made us safer, there is no doubt we that would be the safest country on earth because we have more guns than any other country,” said Maloney. “We know what makes communities safer -- sensible gun safety laws save lives, and we’ve seen that in the statistics that are in this report.”