A Harlem man hurled a good Samaritan into the path of an oncoming subway train because the victim tried to stop him from harassing a couple of teenage girls, prosecutors said Friday.

Todd Hubbard, 57, was harassing two 14-year-old girls on the Brooklyn-bound platform of the No. 2 train at W. 125th St. on July 3, say prosecutors.

“The defendant [Hubbard] pushed one of the young girls, causing her to move back a few steps. When she told the defendant to stop touching her because she didn’t know him, he began to repeatedly call the girls ‘b-----s,’” says a criminal complaint filed by Manhattan prosecutors.

“When she told (Hubbard) to stop touching her because she didn’t know him, he began to repeatedly call the girls ‘bitches,’” the complaint says.

Brown told Hubbard “that it was not appropriate to speak to the young girls in such a manner,” said the complaint, which cited a witness interview.

A fight broke out between the two men, and Hubbard pushed Brown, 57, to the edge of the platform just as a train roared into the station, prosecutors say in a criminal complaint. 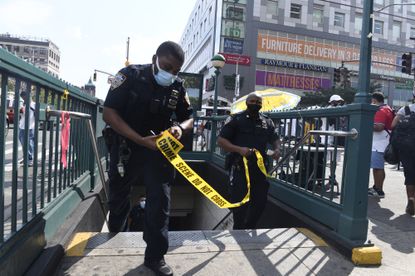 “(Brown) was dragged by the train and his body became lodged between the subway car and the platform,” the criminal complaint states.

Brown “was pronounced dead at the scene when emergency service personnel and police officers arrived.”

After Brown was pushed onto the tracks, Hubbard fled the scene and spent almost three weeks on the lam, cops said.

A childhood friend told the Daily News that Brown’s decision to intervene on behalf of the two young girls was part of his nature.

“He was doing a good thing and tragically lost his life. He saw a bad thing happening at the time and died doing what he believed was right,” said Jayson Cox, 53.

“Now this coward has got to pay us his time.”

At his Manhattan Criminal Court arraignment Friday, Hubbard was charged with second-degree manslaughter, endangering the welfare of a child and two counts of harassment. Judge Michael Frishman ordered him held on $20,000 cash bail, or $40,000 bond.

Baker, 58, said he was surprised to learn that Hubbard didn’t turn himself in immediately after Brown’s death.

“He kept walking around knowing he did a terrible thing like that?” he said. “Continuing his life like he hadn’t murdered the guy? That’s unbelievable.”