In the weeks since CBS showrunner Peter Lenkov, who helmed series including “MacGyver,” “Hawaii Five-0? and “Magnum P.I.,” was fired, dozens of people have come forward with stories about alleged abuse on set.

Among 30 people who shared details was “MacGyver” star Lucas Till, who accused Lenkov of verbal abuse, bullying and body-shaming to the point that the 29-year-old actor considered suicide.

“I’ve never worked this hard in my life, and I am fine with hard work,” Till told Vanity Fair. “But the way Peter treats people is just unacceptable. I was suicidal that first year on the show, because of the way he made me feel. But the way he’s treated the people around me — that’s just my breaking point.”

Till said he approached CBS executives twice, once in 2017 and once in 2020, but they “didn’t take it seriously.”

In a five-page letter to Human Resources, he accused Lenkov of complaining about his “f--king hideous” legs during a scene when he was wearing a hospital gown.

“I’ve struggled with maintaining ‘man weight’ on the show because of the stress, no time to work out, and an unpredictable schedule for proper nourishment,” Till wrote.

Dozens of other former employees made similar allegations about the “toxic” environments created by Lenkov, including “Hawaii Five-0? writer Sarah Goldfinger, who accused him of “volatile rage.” Another told a story about “boys clubs” on set. 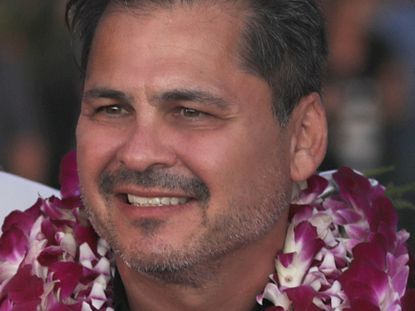 “If we went over there and asked for an answer on some work issue, we would be told by them in this patronizing way, ‘Don’t get emotional,’” the unidentified woman told Vanity Fair. “I’m not emotional, I need an answer.”

Lenkov was fired from CBS on July 7 and the network said the studio “has ended its relationship with him.”

“Our studio is committed to ensuring safe and respectful production environments. Over the past year, we have assigned human resource production partners to every show, expanded staff training and increased reporting options," CBS TV said in a statement at the time.

“We will continue to evolve our practices with continued focus on building trust with all who work on our sets. Every complaint is taken seriously, every claim is investigated, and when evidence is clear that policies were violated and values not upheld, we take decisive action.”

On the news side, similar scandals emerged, including “60 Minutes” executive producer Jeff Fager, who was fired for threatening a CBS reporter. “CBS This Morning” host Charlie Rose was fired after multiple allegations of sexual harassment and, in September 2018, CEO Les Moonves was booted for “willful and material misfeasance, violation of company policies and breach of his employment contract” after a dozen women accused him of sexual harassment and assault.