A cold-blooded killer, clad in a ninja-style mask and a fancy suit and tie*, left his victim’s dismembered corpse inside a $2 million Lower East Side condo just moments before the victim’s sister arrived at the crime scene, a police source indicated Wednesday.

The suspect bolted via a staircase as the sister rode the elevator upstairs to visit victim Fahim Saleh, with her impending arrival interrupting the killer’s efforts to scrub the bloody condo clean and dispose of the body, the source said. The killer left behind the electric saw used to decapitate the 33-year-old victim and lop off Saleh’s arms and legs, and the source said cleaning materials were also found inside the seventh-floor residence.

“He was dressed like a ninja, full out, so you can’t even see his face,” the source said. “He clearly knew what he was doing. We think his intent was to get rid of the body parts and go back and clean it up and make it look like nothing happened. He left before he finished the job.” 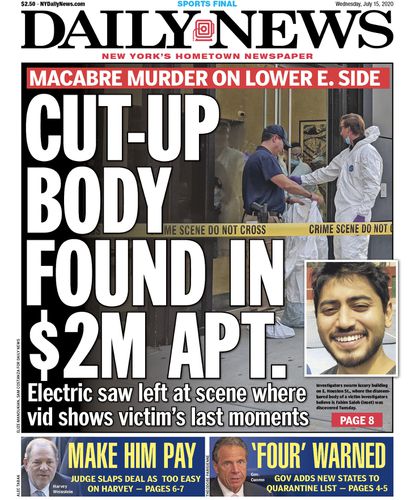 The killer was alerted by the sister’s buzzing from the E. Houston St. lobby, where she was admitted by the virtual doorman, according to the source. The sister called 911 after stumbling upon the gruesome scene, with her millionaire tech entrepreneur brother’s limbless and headless torso inside, police said.

The worried sister went to the apartment because she hadn’t seen her brother in a day, and arrived only to find his butchered body, cops said.

The assassin stabbed him repeatedly in the chest to kill him, according to his autopsy results. He used a stun gun to incapacitate Saleh before murdering him, police sources said.

Local residents were still rattled Wednesday over the horrifying death inside the pricey condo as police continued their hunt for the killer. 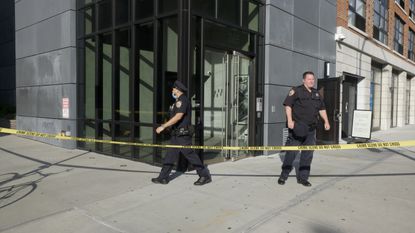 “Everyone in the neighborhood (Tuesday) was in shock,” said a worker at a nearby building. “Our residents feel a little uncomfortable and uneasy.”

An elevator surveillance camera apparently captured the victim’s last moments of life, sources said. It shows the victim getting into the elevator Monday, followed quickly by a second man, dressed in a suit, wearing gloves and a hat, with a mask over his face.

Saleh, who bought the condo for $2.25 milion last year, was the CEO of Gokada, a motorcycle-sharing company in Lagos, Nigeria.