‘Looked down and I was shot in both legs&#039;: Brooklyn drive-by shooting survivor counts blessings as cops hunt for gunman in white sedan

Police blamed gang violence for a drive-by shooting spree that left five people wounded across a bloody swath of Brooklyn as their search continued Tuesday for a white four-door sedan used by the “armed and dangerous” suspects.

The NYPD released three photos of the vehicle on a wanted poster as a 23-year-old woman struck by a bullet in the leg — and by flying shrapnel in the chest — was recovering from her wounds at Brookdale University Hospital.

She was dropped there after the shooting by a driver who sped away, authorities said.

A shooter inside the white sedan opened fire at three separate locations around the Bay View Houses in Canarsie about 6:15 p.m. on Monday.

Victim Matthew Figueroa, 19, said there was no sign of impending trouble as he walked home with friends from a neighborhood corner store before all hell broke loose on Rockaway Parkway near Seaview Ave.

“All you heard was the noise go off and I’m on the floor,” said Figueroa, who remained on crutches Tuesday with bullet wounds in both ankles. “I was like, ‘What the f--k?' I got back up and started running. I ran and I ran and ran, and then my man behind me says, ‘You got hit!' I looked down and I was shot in both legs.” 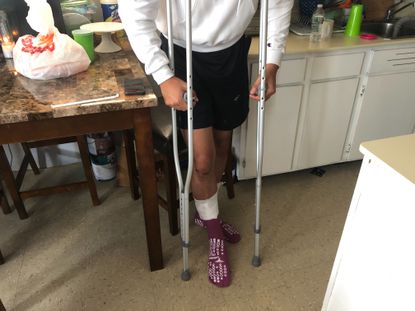 The college psychology student spoke with a bullet fragment still lodged in his right leg as two of his friends recover after surgery from gunshot wounds.

The female victim was recovering in the hospital from wounds that initially appeared far more serious. Her mother was distraught over the young victim’s brush with mortality.

“In lieu of the fact that the COVID death rate has somewhat decreased, we are very disappointed that the crime rate has started to climb again,” the mom said. “Especially since we are all about ‘Black Lives Matter.‘ ”

The fifth victim was identified as an 18-year-old man shot as he rode a scooter past Flatlands Ave. and E. 108th St. A woman riding with him was injured when she tumbled from the vehicle. Police determined the woman was not shot, and said all five shooting victims are expected to survive.

NYPD Chief of Department Terence Monahan said Monday’s shooting spree, as well as most of the recent spate of violence in the city, was gang-related.

“It is pure retaliatory,” he said in an interview with 1010 WINS. “One crew going after another crew, indiscriminately firing on the streets.”

The shootings come as the city grapples with a stark increase in gun violence across the five boroughs. 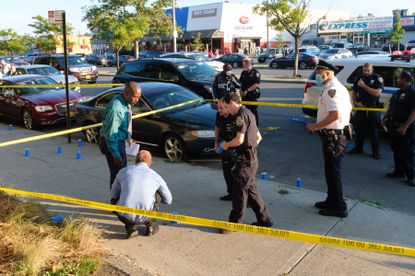 Last year, 17 people were shot in 13 incidents in the same time frame.

“We haven’t seen shootings like this since the ’90s,” said Monahan, who believes that calls to defund the NYPD and restrict police procedures have emboldened criminals.

Anyone with information regarding the white sedan is urged to call Crime Stoppers at (800) 577-TIPS. All calls will be kept confidential.

Figueroa’s mother recalled hearing Monday night gunfire, with her thoughts flashing to her recent nightmares about her son’s safety on the streets.

“Thank God it was just his legs,” she said in the family’s apartment. “Everybody was lucky.”