The Liberty may be a rookie-laden team, but they still have a few veterans in the mix.

Going through training camp during the coronavirus pandemic inside the WNBA bubble in Florida is already odd for those seasoned to the regular system. Doing it outnumbered by those still trying to find their footing in the league is also a challenge.

“They have to learn by fire and trial and error,” Liberty point guard Layshia Clarendon said over video conference on Wednesday, “we just don’t have time for them to truly act like rookies and so in that way it’s been a really interesting balancing act.

“We know we’re asking a ton from them.”

Still, the rookies — headlined by top pick Sabrina Ionescu — seem to be adjusting just fine with the season starting less than ten days away.

“My approach is to take it one game at a time, one day at a time,” rookie Jocelyn Willoughby and the Liberty’s new WNBAPA player representatives, said in response to having a challenging schedule, “and so looking to just get better each day in practice and then leading up to the first game there’s definitely a lot of excitement. I’m the type of person who likes to focus on the here and now in the present, rather than you know the whole picture in long term.”

After Day 5 of training camp, the Liberty’s veteran players know they’ll need to rely on their rookie core more this season than ever before — there’s four of them and six rookies: One of the seven rookies the team planned to enter the bubble with was diagnosed with coronavirus (Megan Walker); two of the veterans were waived (Britney Boyd and Reshanda Gray) way before summer; three other returning players opted to remain in their home countries (Marine Johannes, Han Xu and Rebecca Allen) during the pandemic and their top 2019 pick has been battling coronavirus for over a month (Asia Durr). 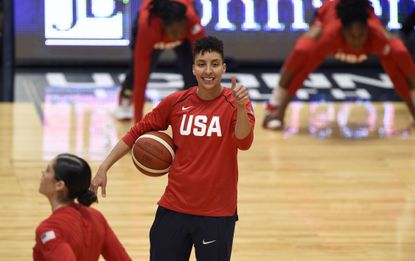 Even missing so many key veterans, it’s been a “fun” change of pace, as Clarendon described it, getting to practice without having to stop for veterans who would normally have to take a break to tend to a knee or another kind of ailment caused by age and use. But there’s been plenty of teachable moments.

“We’re asking them to do things that rookies don’t normally get asked to do because they’re such a big part of our team,” Clarendon, who’s in her eighth season in the W, but her first with the Liberty, said, “and we’re treating them like they’re not rookies.

Ionescu, the team’s new franchise player, said during the Liberty’s virtual Media Day on Monday she hasn’t felt pressured to become the team’s outright leader and has enjoyed being able to be seen as a rookie and allowed to make mistakes. Even though her potential has yet to be seen in live WNBA action against more experienced players, her very presence has seemed to carry its own weight and veterans have been impressed.

“She just makes people better around her,” Clarendon said, “and that’s really nice to have as a point guard playmaker myself, it’s like great to have another point guard playmaker knowing like I could be off the ball sometimes and she could bring it out, but we have like multiple people who can play and lead in different positions.”