An East Village landlord and two construction workers have blood on their hands for tampering with a gas system that caused a fiery explosion four years ago, destroying buildings and killing two men, prosecutors said Monday. 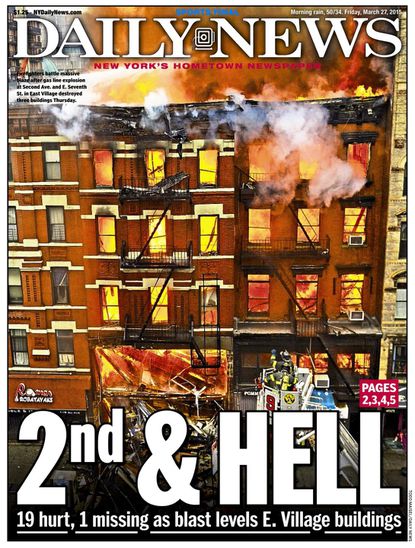 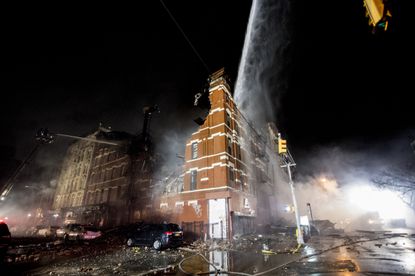 The result of the tampering was “a virtual bomb” in a residential neighborhood, Assistant District Attorney Randolph Clarke said in opening arguments in the trial against 59-year-old landlord Maria Hrynenko and two others in Manhattan Supreme Court.

Their actions show a “blatant disregard for the well-being of others” as Hrynenko, owner of five apartment buildings, rushed a construction project to avoid missing out on rent income, the prosecutor said.

Hrynenko owned the five-story residential building at 121 Second Ave. which had a sushi restaurant storefront on the ground level. Sushi Park patron Nicholas Figueroa, 23, died in the massive fireball in March 2015, along with Moises Yocon Lac, 26, who worked at the restaurant.

Dilber Kukic, 44, was a general contractor hired to do work on Hrynenko’s properties. The two of them allegedly brought in unlicensed plumber Athanasios (Jerry) Ioannidis, 63, to assist in the risky gas line re-routing.

Hrynenko, Kukic and Ioannidis were charged with manslaughter, criminally negligent homicide and related counts in 2016 after an investigation into the cause of the tragedy.

More than a dozen others were seriously hurt including responding firefighters, prosecutors say.

The accused killers “rolled the dice and the cost was paid by Mr. Figueroa, Mr. Lac and 13 others,” Clarke argued in front of a packed courtroom.

In the process of installing an illegal gas delivery system — hiding it from Con Edison and city inspectors — the three defendants “ignored” the obvious risk, the prosecutor said.

Clarke argued that the risk was evident to anyone.

“You don’t need a contractor’s license or a plumber’s license to understand that you don’t mess with natural gas,” he said.

Lawyers for the trio are expected to argue that any gas line manipulation was not the cause of the explosion — that it was an unrelated leak from inside the restaurant.