A Lamborghini driver sparked a wild chain-reaction crash in Brooklyn early Monday that left a pedestrian on the sidewalk critically injured, police said.

The three men in the 2019 Lamborghini SUV all claimed they weren’t driving, and by late Monday none had been charged as police try to figure out who was behind the wheel.

The chaos began when the Lamborghini, heading north on 18th Ave., slammed into a Dodge pickup truck going east on 65th St. in Bensonhurst about 4:30 a.m., cops said.

The impact sent the Dodge careening into a 30-year-old pedestrian in the crosswalk, who was thrown against the outside of a Starbucks. The Dodge also slammed into the coffee shop.

Medics rushed the pedestrian and the 35-year-old man driving the Dodge to Maimonides Medical Center. Both were in critical condition, though the driver has stabilized.

The three men in the SUV were hospitalized at local hospitals with injuries not considered life-threatening. 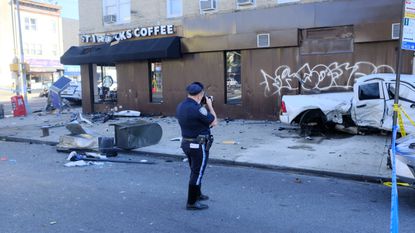 A parked vehicle was also hit and two other vehicles were damaged in the crash, which left behind a trail of wreckage and even badly damaged the Starbucks storefront sign. 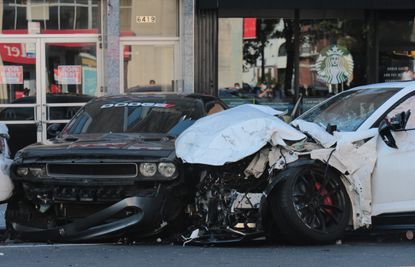