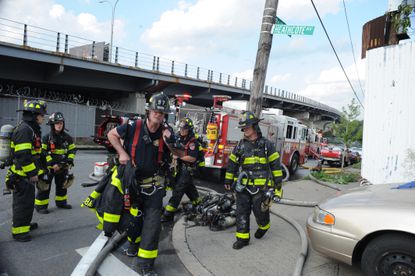 The blaze broke out at 3:15 p.m. Wednesday at New England Used Auto Parts on Boston Rd. by Pinkney Ave. and burned for hours, setting off explosions as it ripped through junked cars and torched tires.

One junkyard employee was seriously hurt, and early on in the blaze a second worker was reported missing. On Thursday afternoon, firefighters found that worker’s body, an FDNY spokesman said.

The spokesman couldn’t provide details on where the body was found. The worker’s identity has not yet been released.

The fire spread to four alarms, and firefighters got help from the Department of Sanitation , which provided a front-loader to lift wreck cars and expose pockets of fire.