Jerry Nadler to Mitch McConnell: ‘Do your job’ on gun laws

WASHINGTON — Mitch McConnell has no business being the majority leader of the Senate if he can’t take up gun legislation without an OK from President Trump first, House Judiciary Committee Chairman Jerry Nadler said Wednesday.

House leaders have been pushing McConnell (R-KY) to take up background check legislation that passed the House in February ever since horrific mass shootings in El Paso, Texas, and Dayton Ohio, over the summer.

McConnell has refused, and repeated as recently as Tuesday that he will not take time to work on gun bills unless the president supports them first.

Nadler told the News in an interview that such a stance amounts to a dodge of McConnell's responsibility as a national leader. He didn't see the logic in doing nothing without first getting Trump's signoff.

"Why not? You have a responsibility. You have the Senate. If you think the bill is necessary for public safety, pass the bill. Let the President sign it or veto it. You pass the bill," Nadler said.

McConnell has suggested there's no point in sending measures to the White House only to see them rejected, since Trump has already threatened to veto both the House-passed bills. But Nadler suggested the McConnell owes it to the country to not just take the infamously mercurial commander-in-chief at his first word.

"Maybe the president will back down, and not veto it. You bring the pressure. You do your job,” Nadler said.

McConnell is in a politically difficult position, suffering from poor approval ratings in a state where he is up for reelection and Trump is popular. He also has GOP senators who might anger the Republican base by voting for new background checks, but face general election problems if they vote against them.

"If you don't want that responsibility, be the senator from Kentucky, play Kentucky politics, fine," Nadler said. "But the majority leader of the Senate, like the Speaker of the House, cannot be responsible only to his or her district. They've got a responsibility to the whole country." 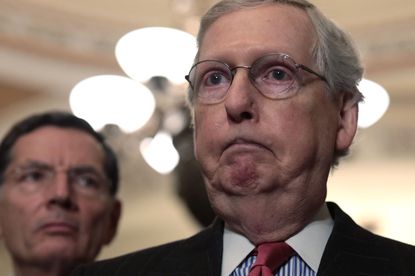 A spokesman for McConnell did not answer a request for comment.

Nadler’s comments came a day after his committee advanced three new gun bills — one to let police seize someone’s guns temporarily when people close to them raise “red flags” that they’re dangerous; a ban on high-capacity magazines, and a bill to keep guns from people convicted of hate crimes.

Banning magazines with more than 10 rounds would go along way to dealing with a thorny issue in the House — whether or not to push to ban assault weapons.

His committee is set to have a hearing Sept. 25 on banning those high-powered guns, but House Speaker Nancy Pelosi (D-California) has not promised such a bill will reach the floor, especially if she is not sure 218 lawmakers ? the majority of the House — will vote for it.

Nadler said he guessed the assault weapons ban probably would get a vote. But he made no promises, and cast the hearing as an educational opportunity for both the public, which largely favors a ban, and members of Congress, including Democrats from "majority maker" swing districts.

"I'm not sure that the bill that's been introduced is in its best form," he said. "So that's something we want to look at, clearly. Maybe we can improve it."

One issue he highlighted was crafting a solid definition of what is an assault weapon and what isn't.

Even if the Judiciary marks up the bill and passes it, Nadler still wasn’t certain it would reach the House floor.