An Israeli court Monday convicted top model Bar Refaeli on multiple tax offenses stemming from a scheme in which she failed to declare her worldwide income for years.

The once-beloved national icon, who took a plea deal and confessed to the crimes last month, is expected to serve nine months of community service while her mother is set to spend 16 months in prison. They must also pay about $1.5 million in fines, on top of millions more in back taxes.

Refaeli’s mom, Zipi, admitted helping the 35-year-old actress blur her actual residency status, and failed to declare her own income as her daughter’s agent.

Zippi was charged with failure to report income, avoiding paying taxes and aiding someone else in evading tax payments. The indictment alleged she blurred her daughter’s actual residency status by putting leases for Refaeli under other family members’ names.

Refaeli arrived in court in Tel Aviv sporting a matching white mask and blouse, the Associated Press reported, her father, Raffi, her mother, and a phalanx of lawyers in tow. 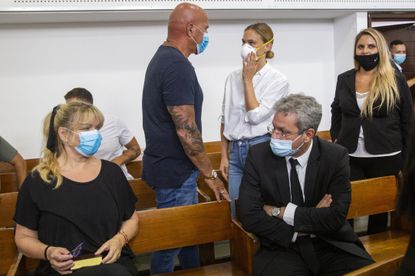 The mother-daughter duo’s court appearance ends a years-long, high-profile legal battle that destroyed the model’s reputation as an informal ambassador for Israel.

Refaeli confessed to four counts of tax offenses over nearly $10 million in undeclared income, most of which she claimed to have earned while living overseas — despite spending most of her time in Israel.

She tried to claim, for instance, that her on-and-off relationship with actor Leonardo DiCaprio from 2006 to 2011 qualified as a “family unit” because she allegedly spent most of that time in the U.S. 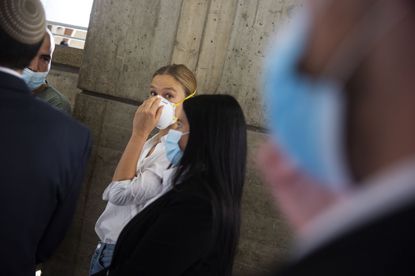 An appeals court didn’t buy it. Israel’s tax law determines residency status based on whether a person spends the majority of the calendar year in the country. Prosecutors charged her with providing incorrect tax information, even though her lawyers tried to chalk her behavior up to youthful mistakes.

Refaeli’s indictment said she earned $7.2 million between 2009 and 2012, all the while claiming to reside overseas so she could avoid paying taxes on that income. During that time, she was traveling the world appearing in high-profile modeling campaigns, adorning the coveted cover of the Sports Illustrated swimsuit edition, and dating DiCaprio.

The conviction and court proceedings haven’t dulled her star-power: She remains a television personality and pitch-woman whose image appears on highway billboards throughout the country. Last year, she hosted the Eurovision Song Contest in Tel Aviv.

“In the relevant time period, Bar was in her early 20s, was working as an international model and was not involved in financial matters,” her attorneys said in a statement, according to AP. “Today she is taking responsibility for mistakes that were made.”