‘I just started to feel punches all over’: Dad and daughter afraid to leave home after caught-on-camera mob beatdown in NYC bodega

Victor Martinez Medina chased the America dream from Mexico to Manhattan, only to walk into a nightmare.

Medina, 40, was knocked out cold as he and his 22-year-old daughter were pounded and pelted with beer bottles by half a dozen people in a savage Washington Heights bodega beatdown captured on security video, police said.

Mugshots of three of the suspects were released Thursday by police in the July 7 attack that left Medina with four loose teeth, black and blue gums and no memory of anything until he awoke inside Harlem Hospital.

“The truth is it all happened very fast,” the Mexican immigrant told the Daily News on Friday. “I just started to feel punches all over. They just grabbed me ... everything is fuzzy. (My wife) says I was thrown on the floor, and I don’t even remember that. I just remember them coming and starting to punch and kick me.

“But after that, I don’t remember anything.”

The one-sided assault on Amsterdam Ave. near W. 164th St. was sparked by ongoing tensions between the daughter and another woman in the neighborhood, a police source said.

The video captured a chaotic scene, with the two women grabbing at each other as several men fired punches at Medina while backing the overwhelmed father against a store refrigerator.

It was not what Medina and his wife, Rosa Santo, expected when they went out to grab milk at the neighborhood store.

Santo, 39, said she was outside the bodega when the attackers bolted past her to target Medina and his daughter. As they fled the scene, the assailants snatched her cell phone just after Santo dialed 911.

The daughter “was yelling ‘They killed my dad!‘” Santo recounted Friday. “I was in shock. I thought they had killed him. He was covered in blood. There was broken glass everywhere. Oh Lord, Holy Spirit, I was worried they were going to come back.”

Police said the daughter was also punched, kicked and struck in the head with beer bottles during the assault.

Cops identified three of the assailants as Devonte Phillips, 21, Tyquan Dupont, 22, and Tyrone Lawrence, 26, while releasing surveillance images of three other suspects. 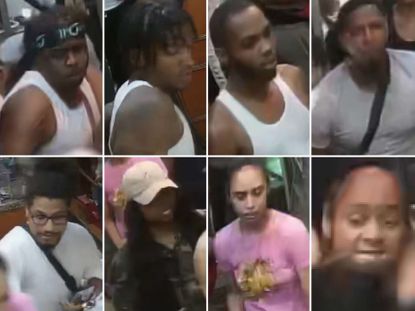 “Like every person who comes to this country, I just hoped to create a better quality of life ... but you don’t think about all the things you will run into,” said Medina, who moved to the city 15 years ago. “I’m not the first person this has happened to. But I am lucky.

“I saw the video today and I told my wife, ‘I either have a really hard head or hard body, because I got off lucky.‘”

All three identified suspects had prior arrests in the last 18 months, with Dupont busted for petit larceny, two counts of criminal possession of stolen property and grand larceny; Lawrence for drug possession and aggravated harassment; and Phillips on narcotics charges, cops said.

Santo worries about how her step-daughter will go forward, knowing the suspects remain free. She recalled the feeling of terror as she watched the strangers target her spouse just a short walk from their apartment.

“People started rushing in and I saw the whole bodega filled up with them. I was just thinking, ‘What’s going to happen? My husband is inside.’ I was shocked,” she recalled.

“We don’t even know them. They could have killed my husband. I’m taking care of him how, because he’s afraid to leave the house.”